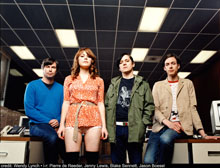 Dredg has long been one of the most captivating live bands around, effectively capturing all of the artistry that goes into their songwriting and thematic motifs within their musicianship. As visually stunning as they are emotionally grabbing and instrumentally skilled, the members of Dredg will make you think and feel while they rock out. What a concept, huh?

The Bronx is just what rock always was and always should be about. They don’t get nearly the amount of recognition that they should, but man, everyone needs to see these guys.

Underoath just may have one of the most devoted followings of any act in this concert guide and easily have taken the most criticism from the media and heat from their contemporaries.

While I’m not about to throw in my two cents for the sake of weighing in with personal opinions (savor it, I don’t do it often), I will say that the Florida boys never put on a lackluster show and always make sure their audience leaves satisfied, sweaty and maybe a little concussed. Regardless of how much or little I agree with the band’s politics or beliefs, I have a hard time not being roped in by certain tracks off its first album, They’re Only Chasing Safety.

On the other hand, we have the poster boys for musical hedonism in Every Time I Die, who are a far less guilty pleasure. Equally as intense as Underoath, but far more unpredictable and chaotic, ETID should be primed to bring its very unconventional hard rocking to the masses with the release of its new album. Less concussive and a little closer to an aural heroin overdose, the band will surely leave its mark all the same.

The Used canceling its Warped gigs created quite the stir among its fans. Somehow, there was still a handful of kids who didn’t get that memo before they bought their Warped tickets and were even more disappointed to learn at the show that the only band they paid to see wasn’t even playing.

Admittedly, there’s a bit of mean-spirited joy to be taken in telling a walking genre cliché that they were too busy taking overexposed default pictures to read the band’s bulletins informing them of this, but that’s neither here nor there.

Point being, the Utah natives that played such a key role in modern rock being what it is today are only doing one SoCal show before heading overseas for the international Taste of Chaos, so it’s going to be a much longer wait if you don’t see them now.

I want to make it clear that under no circumstances do I endorse, support or like the members of Aiden or their music. They will never be a Frequency pick, and if you don’t understand why, then you shouldn’t be reading the column in the first place.

That said, Michigan rockers Still Remains are all kinds of awesome and worth going to this show even if they aren’t the actual headliners. One of the best live acts that appeared on Warped this year, the band may not have blown up yet like some of its tour mates, but with its brand of raw and gritty stage presence, it’s sure to leave a lasting impression on any audience.

I say that a lot of bands in this guide put on a really intense live show – raw, edgy, hardcore. What I should make clear, however, is that all of those bands study the Dillinger Escape Plan’s Guide to Massively Tearing Shit Up on Stage.

Head to Barnes & Noble to buy your copy today, or just go see the band live for a one of a kind reading from frontman Greg Puciato. These guys are notorious for their live show, and their fans are surely impatient to have them back on the road again, so be prepared to witness the destructive power they possess.

Their new album is getting mixed reviews, but I will always have a soft spot in my heart for both Jenny Lewis and Blake Sennett. Granted, both maintain those spots for very different reasons, but at the core of why I dig them is my undying love for Rilo Kiley.

With an unmatched skill for drawing on a multitude of different musical inspirations while maintaining all of its indie rock cred, there just isn’t another band that’s as infectiously catchy while still being hipster friendly.

The band has kept us waiting long enough. I mean, really.

There are precious few bands that could hold out on me for this long without me losing interest, but JEW will forever be integral to my growing up and as such, will get a little more leniency for its between-album stretches. But only because you know the group will continue to write the anthems that are the soundtrack to all our lives.

The last Head Automatica album was a bit disappointing, by which I mean it was a bit awful. As such, frontman Daryl Palumbo has luckily taken the hint and returned to his more experimental hard rock roots, hopefully picking up right where Glassjaw left off before its hiatus.

If there is anything Palumbo knows how to do well, it’s put on an intense, in-your-face show, something Head Automatica wasn’t terribly conducive to, so the Long Island-bred frontman should have a lot of extra face melting intensity stored up from the last few years.

Thrice is amazing. Brand New is also amazing. Both of these bands are amazing for very similar reasons.

Put them on a tour together and you have one of the most aurally moving and emotionally evocative shows that two bands could possibly put on. And I have a big fangasm because these two bands from opposite coasts have been needing to tour together for-ever.

One would be hard pressed to find frontmen as visibly passionate and committed to their craft as Thrice’s Dustin Kensrue and Brand New’s Jesse Lacey, and would be equally as challenged to find vocalists who were as skilled in conveying that raw emotion to an audience.

The eight musicians that comprise these two bands are all talented artists in their own right, so seeing them share one stage will surely make for a worthwhile show.

Because you just can’t have Thrice without Thursday. They’re the quintessential Ryan Atwood and Marissa Cooper of artsy post hardcore.

If ever there was a band that blew up over the course of Warped, it would indeed be Paramore, coming out of nowhere from being that band only select few scene kids were familiar with to that band in the background of all our daily existences. Who would’ve thought? Well … I did, but y’know, who’s counting, right?

While its explosion on the mainstream market was undoubtedly sudden with a big media push from MTV, the Tennessee natives have been hauling ass to win fans over the old fashioned way from their start. It may not be that tiny band that old school fans can keep tucked in their pocket, but there’s none more deserving of success than these guys (and girl).