A Stab At Stardom: House of Flying Daggers Actress Ziyi Zhang is Living Her Hollywood Dream 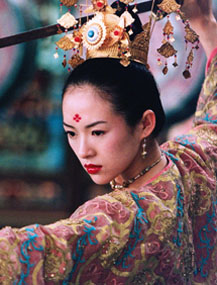 Ziyi Zhang never thought about the American Dream. When she was growing up in Beijing, she was more interested in the Chinese Dream.

In a few short years, however, the 25-year-old actress has managed to live both dreams. She already is a popular movie actress in her homeland, and she is about to become a major star in this country.

Sitting in a booth in a fashionable Beverly Hills restaurant, giddy from a combination of excitement and lack of sleep, Zhang can barely contain her enthusiasm.

It’s been four months since she’s seen her family, but she has been way too busy to think about being homesick. When she’s not working up to 15 hours a day in her first starring role in an American film (Memoirs of a Geisha, directed by Chicago’s Rob Marshall and scheduled for a Christmas 2005 release), or promoting her new Chinese film (House of Flying Daggers, currently in theaters), she’s tooling around L.A. in her new Lexus, with the sounds of Usher and Eminem blaring from the CD player.

"I’m so tired. I haven’t had a day off in weeks. But I’m having so much fun," she says in quick machine-gun bursts between sips of tea, with her New York-based manager/interpreter by her side to help with words that might get lost in translation.

Not that she needs much help in the language department. After all, Memoirs of a Geisha is being filmed in English.

"I love the freedom I have in America," she says with the gush of a new arrival. "I love the freedom to walk around and not be recognized. In Beijing, everybody knows what I look like, and people are always stopping me in the street and shouting my name. The newspapers run pictures of my house, and there are people always standing outside looking for me.

She would be smart to enjoy the anonymity as long as she can because it probably won’t last forever.

Although American audiences might be vaguely familiar with her from two previous Chinese films, Ang Lee’s Crouching Tiger, Hidden Dragon and Zhang Yimou’s Hero, or from a supporting role as a villain in the action-comedy Rush Hour 2, her face no doubt will become even more familiar as strong word-of-mouth spreads on House of Flying Daggers.

Also directed by the brilliant filmmaker Yimou, the new, subtitled film takes place in 859 A.D. near the end of the Tang Dynasty. The government is locked in a deadly battle with various rebel groups, the most notorious of which is called the House of Flying Daggers. Two local police officers go undercover to try to capture the new leader of the rebel group.

Their first stop is a brothel where one of the new dancers is rumored to be a member of the group. The dancer (Zhang) is blind, but she has many hidden talents, not the least of which is dancing.

As in Yimou’s Hero, the new film features spectacular cinematography, state-of-the-art martial-arts fighting and solid storytelling, but the action is more intense, the choreography more elaborate, and the twists and turns more clever than in the previous film.

"It is a beautiful love story with a lot of martial arts," the actress says with a laugh. "There’s something for everyone."

Zhang, who trained as a dancer, insisted that she is not a martial artist in the same league as Jackie Chan and Jet Li, but approaches her martial-arts scenes as a dancer. Still, she trains in the martial arts for two months before every action movie.

This film required more training than others because she plays a dancer who is blind.

She said she moved in with a 13-year-old blind girl in Beijing to study her movements and had to go into intense training for one particular dance scene. It is called the "Echo Dance" and calls for her to hit drums that encircle her with the elongated sleeves of her dress.

"That scene took two months to train for and two weeks to shoot," she explained. "Those sleeves were so heavy, and I had to throw them hundreds of times each day. I was so tired at the end of each day, but my arms got stronger and stronger, and I became a better bowler."

"I like working with him because he knows what he wants," the actress said. "Before we start shooting, he knows what the entire movie is going to look like. He cares about details, and I trust him a lot. When you trust your director, you never have to worry about your acting."

Zhang, who will still live with her parents when she returns to China, grew up in an apartment in Beijing with her father, a government economist; her mother, a kindergarten teacher; and her older brother, who now runs his own advertising agency.

When she was 11, she enrolled in a dance school but insists that she had no desire to become a professional dancer.

"My parents sent me to study dance so I could build my muscles," she said. "I was very small and very weak for my age. They were worried about my health."

She left that school when she was 17, took a government-sponsored aptitude test and discovered that she had a knack for acting. Since she didn’t know how to do anything else, she auditioned for one of the few available spots in the China Central Drama College and was accepted.

In her second year at the school, she was among a group of budding actresses who auditioned for a commercial being filmed at the school by Yimou. Nothing came of the commercial, but when the director was casting roles six months later for his film The Road Home, he remembered that exquisite face from the acting school.

A year later, while still in school, she impressed Ang Lee enough to win the role in Crouching Tiger, Hidden Dragon.

"We were all surprised by how successful that movie was in America, and I don’t have any answers to why it was so successful. It helped my career, but even more important, it helped open doors for other Chinese films.

"And it is important that the quality of Chinese films be maintained, or that door will be closing."

Zhang (it’s pronounced Jung) said the door was also opened for Chinese actresses, and she counts herself as one of the lucky ones who have been able to step through the door to a Hollywood career.

"There usually are not many scripts for Asians in this country. And that is especially true for Asian girls. That’s why I’m working so hard. I must take advantage of this opportunity.

"I never dreamed of working in Hollywood movies because Hollywood seemed so far away," she added. "But now that I’m here, I like it, and I want to stay."