Elevaters: On Their Way Up 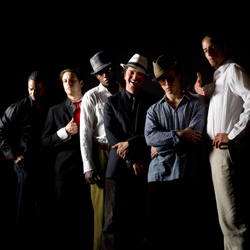 Upbeat notes dance in the air as guitar riffs slide around hip-hop melded with funk, soul and R&B to create the fresh Elevaters sound that is irresistibly danceable and crowd-pleasing. The collective six are growing in popularity and notoriety through a dangerous one-two combo of ambition and positivity.

As a band, the Elevaters have the unique capability to fall into an unclassifiable genre. In a world of screamo and trip-hop, music genre bending is nothing new. Yet, the Elevaters crew manages to mix elements of such a diverse range of musical styles from world beats to straight beatbox that they fall into a blend.

While hip-hop is definitely dominant in the boys’ sound, no classification seems quite right for this sextet. They simply take inspiration from others and make it their own.

“Our sound is a convergence of positive, uplifting music from history to the present,” says guitarist David Noily.

Apparently, they aren’t the only ones listening. In June, the band broke the radio waves with a spin of its track “The One” on Garth Trinidad’s Chocolate City show for KCRW.

In the past few months, the Elevaters have played alongside hip-hop heavyweights such as Medusa, KRS-One and hip-hop legends, De La Soul. Last year, Dane Cook’s HBO series “Tourgasm” used the group’s single “Let’s Get Real” causing a following on satellite radio.

The summer was filled with many firsts for the funk outfit. The Elevaters' first album, Rising, was just released nationally.

More recently, the band premiered its first music video for the song “Grandma’s Hands” at the Fourth Annual Elevate Film and Music Festival on Sept. 15 at Kodak Theatre. (The name was merely a coincidence, but shared a similar message.)

While the band is basking in its newfound ability to stretch beyond everyday borders, it still plays numerous shows in the L.A. area. Drawing a diverse mix of fans that seek its danceable ditties, the Elevaters can often be found playing local venues such as the Avalon, KeyClub, Viper Room, the Mint and Temple Bar.

Perhaps one of the reasons the band continues to garner attention is because of its dynamic live shows. The group formed primarily from meeting one another in a UCLA theater class.

Apparently, the members retained their ability to command an audience and the desire to entertain. This is obvious the minute they take the stage. With semi-choreographed dance maneuvers and infectious jams, the Elevaters make a compelling plea for overall good vibes.

Vocalist/beatboxer Ben Hall agrees, “We started playing together, and it made people giggle and smile. It makes us smile.”

Currently the band is pushing to make music its full time gig. With six members, some who still pursue acting careers and others with day jobs, they face the common scheduling challenges of many indie bands.

Noily says, “Because there are six of us – it can be hard to make ends meet.”

However, they’re not discouraged by the small set backs and continue exploring ways to get their music to the masses. Right now, the band is working on its first acoustic album, as well as seeking management that it believes can take the group to the next level.

Drummer Andre Morton explains that the Elevaters recognize they have a good situation. In addition to management, they’re looking for an independent label to help turn their tunes to dividends.

“A label will come to us,” says bassist Itai Shapira. “We have a beautiful thing.”