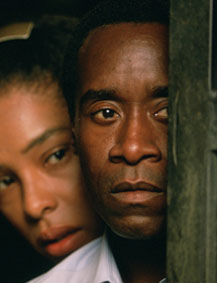 If a million people were killed in less than 100 days, would anyone notice? Your might automatically respond, "Of course!," believing that the outcry would be deafening. That the entire world would unite to stop more people from being murdered and to make sure that an atrocity like this would never happen again.

If one were to ask a citizen of Rwanda, however, one might get a different answer. In the film Hotel Rwanda, the genocide that occurred over three months in the central African nation is chronicled through the eyes of Paul Rusesabagina, a hotel manager who housed over a thousand minority refugees during their struggle against the majority militia.

Rusesabagina, portrayed by Don Cheadle (Ocean’s 11), is a real-life hero who stood up against overwhelming odds to keep those he swore to protect safe. Cheadle was able to meet with Rusesabagina before shooting the film to get a feel for the kind of person he was.

"When I got to know him, it was amazing. He had this joie d’vive – this love of life," says Cheadle, "when I thought I might find this shell of a man. But his comportment is so specific, so well put together."

The story itself is startlingly accurate and devastatingly intense. Director Terry George (who wrote In the Name of the Father and The Boxer) spent weeks working out the details of actual events and incorporating them into the script, both with historical consultants and with Rusesabagina himself.

When Cheadle first sat down to speak with Rusesabagina, he was hesitant to dive deep into the Rwandan’s experience. He explains, "When talking to Paul, it was hard, because I didn’t know where he was [emotionally] – I mean, it was only 10 years ago. We sat together and he just began telling me stories, these amazing stories."

The story, both in its historical context and its cinematic framing, is reminiscent of Steven Spielberg’s Schindler’s List. Both Cheadle and George, however, are quick to dismiss these parallels, calling Hotel Rwanda "a much more accessible film," which Cheadle cites as having "no graphic violence. We took it back to the ratings board and made them change it from an R-rating, because they couldn’t give a good reason why it deserved one." Though the film now garners a PG-13 rating, audiences are warned that there are a number of disturbing images. One particularly moving sequence involves showing an entire road covered with bodies as Cheadle’s character drives onto the road, wondering why the drive is so incredibly bumpy.

These kind of disturbing, real-life images are scattered throughout the film, forcing the audience to evaluate their own feelings about the events that occurred in Rwanda. The viewer is most directly put into the film through the eyes of Joaquin Phoenix’s character, a Western photographer who tells Cheadle, "People will see these images and say ‘that’s horrible,’ and go right back to eating dinner." This, of course, was the case, since the only organization that lent help to quell the crisis was the UN – and even they pulled out when times got rough.

"A couple hundred police officers is all it would have taken to stop the genocide," laments George. In fact, the film’s tagline really says it all: "When the world turned its back, he opened his arms."

In keeping with their desire to tell the story truthfully, the filmmakers used every tool at their disposal. "Some of the people in the film were survivors," says Cheadle. "I’d see them crying on set during a strenuous scene and I’d know that the person survived the genocide. They wanted to be there though. It was a catharsis."

The film well replicates the experience of those 100 days in 1994, bringing home Paul Rusesabagina’s words: "Every day I thought I was going to die." Hotel Rwanda’s filmmakers hope to open the eyes of the world with this engaging, true story, but more importantly, hope that atrocities of this kind will be forever be a thing of the past.