Lars and the Real Girl: A Love Story Like No Other 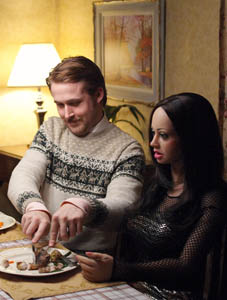 “Lars is a big part of who I am,” admits Academy Award nominated actor Ryan Gosling about his leading role in Lars and the Real Girl. Hmm ... maybe it’s not the most socially acceptable move to identify yourself with a loner who falls in love with a sex doll.

The initial buzz surrounding Lars likened the film to a humorous, kinky sex farce. Critics balked at the notion that audiences would find anything endearing about its subject matter. But contrary to popular belief, all parties involved with this sleepy indie film lend a girth of sensitivity to a very salacious topic.

Members of a small town rally around in support of Lars (Gosling) when he purchases a Real Doll and attempts to pass her off as his girlfriend. He names her Bianca, gives her a bio and is unashamed to be seen with her in public.

Family members don’t know what to make of Lars’ apparent decline in mental health. But eventually Lars shows everyone he’s going to be just fine.

Gosling prides himself on taking interesting chances with his career. He was a sociopath in Murder by Numbers and followed that up with a tear-jerking stint as the romantic lead in The Notebook.

Gosling completely forgoes the impetus to play Lars as a pervert. There also isn’t the need to go for the easy laugh in scenes opposite the doll. Instead, he treats his character with amazing humanity.

“Lars is like a Don Quixote-esque character,” says the 26 year old. “Every chance he gets when he could go dark, he goes toward the light.”

The end result is a cohesive piece between two artists – Gosling and director Craig Gillspie – that clearly understand that sometimes in the midst of detachment, you have more love around you than you initially realized. So, at the end of the day, who cares what all those other people think?

Lars and the Real Girl releases in select theaters Oct. 12.