The Matches: Trace Trends and Set a Few of Their Own 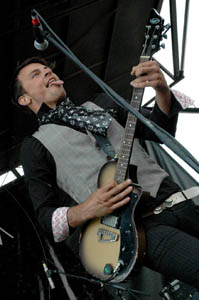 “I don’t know if I’m a trendsetter,” says Matches frontman Shawn Harris. “That may be kind of poisonous to even think about really.”

And while Harris is similarly modest regarding everything else that he and his band do, an ever-growing fan base, along with constant recognition from their peers as innovators of their genre, just might say otherwise.

“I think of myself as a person who assesses trends and says, ‘All right, not going to do that,’” he jokes. “When I draw inspiration for things – musical, artistic or fashion-wise – I like to draw from times that have been forgotten or from more obscure places that haven’t been connected with my demographic.”

As proof of this, Harris reveals, “I’ve been shopping in the women’s section of thrift stores, and I find that the more insular and small a town is, the better their thrift store shopping is. I’m sure I’m wearing the clothes of many a perished old woman.”

Harris and his band mates, guitarist Jon Devoto, bassist Justin San Souci and drummer Matt Whalen, are hardly strangers to marching to their own beat, however, with Harris’s more eccentric wardrobe choices being the least pressing of their issues.

“We’re about to put out our third record in early ’08 and our label identified to us that we were going to be a harder sell because our style, both musically and visually, didn’t adhere to any of the scenes that are easy to tap into,” says Harris. “We aren’t a MySpace band. We fully acknowledged that and hope that people are attracted over time, rather than with some onslaught of ‘This is the new thing that just got replaced!’ We got away from that cycle knowing it could take longer for our band to build and that’s quite alright with us.”

While Harris has faith that his band can bring people around the old-fashioned way, he’s definitely not opposed to the fact that, even despite their stylistic quirks, the mainstream media has taken a bit of a liking to them lately.

“There is that group of people that are able to find out about bands without the aid of mass media but it takes a while to get there. I guess the antithesis of them is wherever Nickelback is able to sell all their CDs,” he says with a laugh. “But there are a whole lot of people who are starting out as music fans that our band would never reach if not for big stations playing us. It’s cool to know that you might turn on your TV and stumble upon us. That’s how I found the video for Green Day’s ‘Basket Case’ that made me want to pick up a guitar.”

From there, it shouldn’t be any surprise that Harris would list bands that successfully made a name for themselves similarly as his biggest influences. “Early on, it was some of our local bands – Green Day, Rancid, AFI. Then Radiohead put out Kid A and it blew my mind. I never thought that a rock band could put out an electronic album like that and it opened up a new realm of what music could be. In recent years, I’ve started to excavate and dig into the beginnings of rock ’n’ roll. I’m really into Bob Dylan. I’m reading about Elvis Presley right now. It’s so weird to trace trends in music.” Maybe it’s not too hard to see where Harris gets that penchant for old things from after all.

The Matches will perform Oct. 13 at the Troubadour in West Hollywood. For more information, visit www.thematches.com.