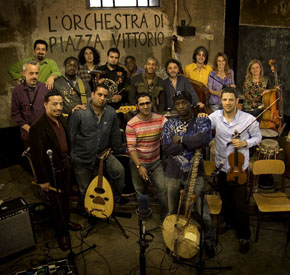 Beginning their search soon after 9/11, the community organization “Apollo 11” undergoes an incredible five-year journey that ultimately results in 20-plus musicians from 11 countries on four continents who speak eight different languages – all captured by filmmaker Agostino Ferrente.

Despite overwhelming hurdles such as finding talented musicians, money and rehearsal and performance spaces in Rome, Tronco manages to piece together an orchestra that has adapted and evolved over a couple of years. In Rome, where the government expresses open disdain for immigrants, the Orchestra di Piazza Vittorio has become a symbol of unity and fusion of culture, talent and people.

“The film has such a fantastic message of the Babel-like immigrant orchestra spreading the harmonious universal language of music in the face of anti-immigration fears and suspicion,” says Netflix’s Chief Content Officer Ted Sarandos.

The film has received several international cinema awards and has played in festivals throughout the world, from Buenos Aires to Hong Kong.

The Egyptian Theatre is located at 6712 Hollywood Boulevard in Los Angeles. The screening begins at 7:30 p.m. followed by a live concert. $10, $8 for students. The Orchestra of Piazza Vittorio will be available at Netflix.com on Oct. 23.