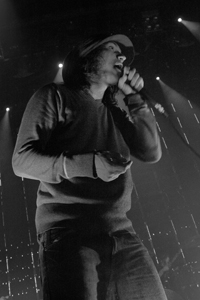 For anyone that didn’t make it out, it was a big happy, shred-y Warped Tour reunion/retrospective for Saosin’s so-called first “real headlining tour.” For anyone that did make it out to the band’s Chain Reaction show earlier this year, it was the exact opposite of that.

Opening the show, the Dear & Departed brought their anthemic sound to the stage with their signature impeccably styled charisma. One of the best up ’n’ coming bands to harness the quintessential big rock sound, the Euro-turned-Orange-County transplants’ most endearing quality is how effortless and unforced they make it look.

Atlanta hardcore kids Norma Jean filled the appetite of the more thrashing-inclined audience. As visually intense as they are sonically, the band members looked like they were maxing out their bodies’ physical capabilities as the band plowed through songs from new album Redeemer.

Closing the night, the actual OC natives of Saosin showed off their big production budget, which, granted, neither they nor their fans aren’t used to seeing the band perform with now. What made it special this time, however, was that everything was legitimately theirs.

The little band that, not so long ago, many thought wouldn’t ever last had tangible proof that they were a stronger band than ever before. Yeah, they write catchy songs. Yeah, they all rock out when they play. Yeah, frontman Cove Reber has massively stepped up his game and proven his worth as a singer. But more than all that, it’s their collective infectious likeability that sets them apart and makes them worth the big stages their music was meant to be heard from.