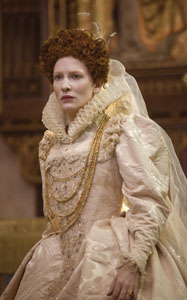 Kitschy and overdone with a bludgeoning musical score, Elizabeth: The Golden Age seems to exist for one reason only: to give its titular star, Cate Blanchett, the chance to once again work her onscreen magic as one of England’s most powerful rulers. Golden Age comes to theaters nearly 10 years after its predecessor, Elizabeth, which earned a then-28 Blanchett an Oscar nomination for Best Actress. Shekhar Kapur directs both films.

In Kapur’s first tale, Blanchett’s Elizabeth I was a young, naïve girl who, following the death of her half-sister and current Queen of England, Mary Tudor, is put on the throne. Now, a decade later, Elizabeth has come into her own: she’s both smart and confident.

Her biggest looming danger is the possible breakout of a holy war between England and the rest of Europe. Spain’s ruler, Prince Philip (Jordi Mollà), a devout Catholic, is in cohorts with an imprisoned Mary Queen of Scots (Samantha Morton) to devise a plan to assassinate Elizabeth, a Protestant, and put Catholic Mary (who is also Elizabeth’s cousin) on the throne of England instead.

Threat of war aside, Elizabeth also becomes taken with a new visitor to the court, Sir Walter Raleigh (Clive Owen), an adventurer who becomes rather enthralled with Bess (Abbie Cornish), Elizabeth’s top lady in waiting.

The biggest problem lurking within Golden Age is the fact that while so many things are set up – including a possible war with Spain, a hopeful romance with Raleigh and an entire subplot of Catholic versus Protestant where many of the film’s characters (including a scheming Rhys Ifans) are left in the shadows – the payoffs come too quickly, and hardly seem to resonate.

Aside from Blanchett, an accomplished actress who seems to enjoy playing the English monarch a second time around, the film’s only saving graces are its set and costume design.