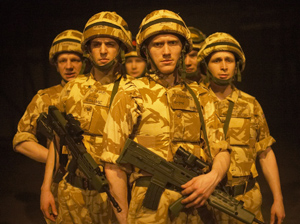 “Black Watch” is a history lesson, a deep look into the minds of soldiers who returned from a battleground that devastated them mind, body and soul.

The Black Watch was a Scottish regiment with 300 years of history behind it. The 800-man regiment was sent into Iraq, into one of the bloodiest hotspots of the conflict, to replace 4,000 American soldiers.

The story is told across centuries and across the world, deeply impressing upon the audience that things have not changed, that young men go abroad to fight and die for the same reasons now as they did hundreds of years ago.

The story unfolds when the unofficial leader of the group of returned soldiers, Cammy, brings a journalist to listen to the stories of himself and his battle mates. Immediately lines are drawn – the journalist sits across the stage from the soldiers telling their tales.

Whether you’re for the war in Iraq or against it, “Black Watch” will convince you that what Cammy says is true: “This is not what we signed up for.”

Freud Playhouse is located on the UCLA campus in Westwood. For more information, www.uclalive.org.