Ben Affleck: A Change of Direction with Gone Baby Gone 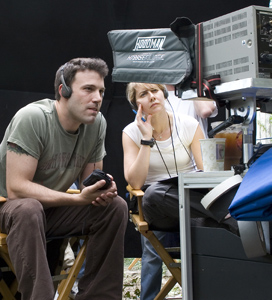 Ben Affleck appears somewhat apprehensive as he strolls in for press interviews to promote his directional debut Gone Baby Gone. The actor-turned-director hasn’t had it easy with critics scrutinizing his every project since the harshly panned Gigli.

Though he’s slowly redeeming himself with flicks like Smokin’ Aces and Hollywoodland, he seems keenly aware of the adage that you’re only as good as your last great project, which has been a while for the 35-year-old actor.

Once America’s golden boy, Affleck’s big break came in the shape of the Academy Award-winning Good Will Hunting, which he co-wrote with neighborhood pal Matt Damon. This shot Affleck to stardom, earning him roles in Armageddon, Shakespeare in Love, Pearl Harbor, The Sum of All Fears and Daredevil and establishing him as Hollywood’s leading actor. After the release of several critically panned box office flops, however, Affleck’s career waned considerably.

With an ambitious adaptation of a Dennis Lehane book Affleck can be excused for being apprehensive, while he can also rest assured he’s acquired a solid footing in the director’s seat. A fan of Lehane’s work, Affleck claims he fell in love with Gone after receiving it from a friend. He pursued it as his directional debut because he understood the world it was set in.

“I come from that city and it had a plot architecture that was built in that I could fall back on,” claims the actor who is also aware of the many comparisons that will be made to the Academy Award-winning flick, Mystic River, also adapted from a Lehane novel.

“I would love for this movie to be Mystic River, as it’s a movie I admire,” he assures. “I knew I would be compared to that movie and that’s just the nature of it. I think in a weird way it kind of helps because he’s [Clint Eastwood] made such a good movie from a Lehane book set in Boston and that’s probably a pretty good advertisement.”

Though both movies share some similarities, there are also major contrasts. Gone follows two local private investigators who are partners, life-long friends and lovers trying to track down a little girl’s kidnapping, and explores how the investigation affects their personal lives.

The duo’s investigation, however, unearths a web of lies, secrets and a labyrinthine maze of corruption as they uncover a tangled trail of deceit and betrayal that points to a motive behind Amanda’s disappearance. With Morgan Freeman as Captain Jack Doyle leading the police investigation, Ed Harris as the relentless detective Remy Bressant and the talented Amy Ryan playing Amanda’s drug-addicted mother Helene, this is an edgy and provocative thriller that aptly captures the uglier side of human nature.

Affleck clearly captures the Boston neighborhood and understands the rhythm and hue of Boston’s working-class. One of the movie’s biggest draws is that it unites Affleck with his younger brother, Casey.

“Initially the part was written older, and so the initial idea wasn’t about Casey because the guy was about 40,” explains Affleck. “It was one of those decisions where I thought it seemed more exciting story-wise because the guy had more to lose and the stakes were higher. Plus, I also had available to me a spectacular actor who understood Boston and who I really had shorthand with, who was available and who I knew I could get and afford.”

With some admirable jolts of surprise when crucial bits of information are disclosed, Gone is a moralistic tale with a surprisingly unsettling and debatable ending purposely done to create a moral debate. For audiences who can handle the grim tone, it’s a strong, suspenseful and well-executed flick.