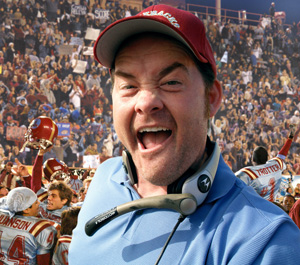 When people say dreams don’t come true, tell them about Rudy, the little football player that could. Or struggling meat-packer-turned heavyweight champ Rocky Balboa. Inspirational sports films have long tugged at the heartstrings, even making the manliest of men unabashedly teary-eyed.

Enough of the waterworks, it’s time to laugh. Director of The Hot Chick Tom Brady (yes, just like the quarterback) brings you the gut-busting comedy The Comebacks, spoofing the best sports films of our time from Friday Night Lights to Remember the Titans, just in time for football season.

David Koechner plays Coach Lambeau Fields, who’s unwillingly named the worst coach in history. But when Freddie Wiseman (Carl Weathers) proposes an offer to coach a college football team of pathetic “athletes,” Coach Fields sees this as his last opportunity to prove he’s not the loser everyone thinks he is.

The film is perfectly fleshed out with a supporting cast that includes Melora Hardin (“The Office”) as Coach’s wife, Matthew Lawrence and new starlet Brooke Nevin.

According to Brady, finding Coach Fields meant getting someone with superb comedic talent that could also add emotion and realism to the role. He quickly had Koechner in mind.

“When I read the script, I immediately saw him in it. I’ve been a fan of his for so long. He’s very funny at what he does.,” Brady says.

Yet prior to the film, Koechner only had supporting roles in such comedies as Anchorman: The Legend of Ron Burgundy and Talladega Nights and cameo appearances on “The Office.” It took some convincing for the studio to finally award him leading man status – and it’s long overdue.

“Every actor just wants to work, so if you get an opportunity to be the lead, of course even all the better. And this was a really good opportunity; Tom Brady is a wonderful director,” Koechner relays.

“I hope from this movie more than anything else that people will take that David Koechner has arrived,” professes Brady. “He can be our new Bill Murray. I’m really rooting for him.”

Just as comedic skill proved important, so was the athletic aspect as well, and thankfully, most of the stars are affiliated with sports in real life. Koechner, a college football fan who roots for his alma mater, the University of Missouri, coaches his son’s little league team. Weathers played football in college, then professionally for the Raiders before he became an actor.

Matthew Lawrence, who Brady calls the next Mark Wahlberg and who plays hot QB Lance, mentions, “We got to play football for a couple weeks before the movie started, that was fun.”

He warns, “I’m not an all-American athlete, that’s for sure. But it’s fun to play one.”

The film also calls for plenty of physical comedy and acting as ludicrous as possible. You have to wonder how difficult it was for the cast not to laugh while shooting.

“Anytime David acted opposite another actor they would have a hard time keeping it together,” Brady says, laughing himself.

Ridiculous scenes are numerous, as in a few that have the football team prancing around in neon underwear and breaking out into song and dance in the boys’ locker room. Lawrence especially had to get in touch with his feminine side – his character is no pansy, yet he bears a bizarre penchant for wearing tutus and women’s panties.

While he doesn’t have the same affinity for women undergarments in real life, one can’t help wonder if he took private dance lessons from his girlfriend, Cheryl Burke of “Dancing with the Stars” to prepare.

“I’ve taken a little ballet,” he quips. “She is a phenomenal dancer. I’ve never really tried it. She said I’m alright, but I don’t know if she’s just trying to be nice.”

Aside from the crude tongue-in-cheek humor, what makes The Comebacks different from many comedic box-office bombs? For one thing, it has more grit and emotion than other recent spoofs. But the film’s main advantage is that it’s taking it back to the old school, channeling the classics like Airplane! and The Naked Gun instead.

And he sure does.

The Comebacks releases in theaters Oct. 19.