Rendition: An Extraordinary Tale of Other People's Lives 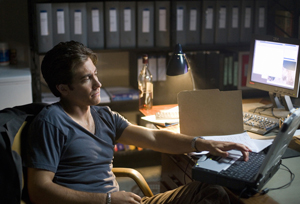 “Extraordinary Rendition” is the latest covert tactic – implemented by the U.S. Government – whose gruesome details have finally seen the light of day. This act allows people in high places to order the abduction of foreign nationals and have them beaten and tortured during detainment, in hopes that they will “break” and leak important information.

In Rendition, directed by Gavin Hood (Tsotsi), this frightening blemish in American politics gets a stark and unfriendly face. Reese Witherspoon plays the pregnant wife of an Egyptian-American who is snatched from a flight to Chicago.

When he fails to return home on schedule, she exhausts every avenue available to her to get answers. Meanwhile, in a dank makeshift prison somewhere on the other side of the world, her husband (Omar Metwally) is being violently interrogated by his captors.

The rest of Rendition unfolds much in the same way that Pulp Fiction and Memento did. It twists and turns and plays with the linear structure of things to keep the viewer in a constant state of unrest.

“[Rendition] was a real page-turner and a good thriller that had me wondering, ‘What’s going to happen next?’” says Hood. “But at the same time it was raising profound and difficult questions that don’t have easy answers. I remember finishing the script and just sitting for days wondering, ‘What do I think about this?’”

Even Jake Gyllenhaal, who lends his considerable talents to this ensemble cast, agrees. His character, Douglas, is caught in the middle of a rather precarious international incident, which forces him to ask some very important questions.

“I think many people in my generation are searching for something – their identity, who they are, what they want to do with their lives,” admits Gyllenhaal. “This is where Douglas finds himself. When we first meet Douglas, he has resigned himself to a sort of apathy. But he is quickly faced with a haunting reality that shakes him and forces him to face his own humanity.”

To prepare himself for his part, Gyllenhaal admits to doing research the old-fashioned way: by watching his favorite movies. In his words, he gives a “shout-out” to actors like Matt Damon and his role in The Good Shepherd as the ones that really guided his performance.

The cast of Rendition is an international affair. Many of the actors that demonstrate such anguish and pathos onscreen are from Israeli, Muslim and American backgrounds.

Meryl Streep and Peter Sarsgaard (Year of the Dog) turn in gripping portrayals of U.S. policymakers that turn a blind eye to the horrors that their respective indifference and denial produces.

About working with Streep, Sarsgaard is blunt: “She makes the film better.”

Witherspoon agrees, “[Meryl] was wonderful. She was completely intimidating.”

On the other end of the spectrum is a young couple played wonderfully by newcomers Zineb Oukach (Fatima) and Moa Khouas (Khalid). These young people in so many ways represent the heart of the film.

They are the light at the end of Rendition’s often dark tunnel. The hope they give to the storyline as well as the shocking surprise in connection with their relationship are unforgettable.

Extraordinary Rendition and its practices are still very much a part of the American political lexicon. As our nation wages its war on terror, many innocent citizens will find themselves caught in a horrifying web of deceit.

Hood speaks very candidly about the subject, likening it to the witchhunt that so many from his native South Africa endured as a result of Apartheid. His main desire is that the people of this country take notice and realize that the events of his film aren’t just Hollywood imagination.

He stresses that there are several people with whom he had dealings with during Rendition’s production that are currently in litigation against the U.S. government for wrongful imprisonment.

But Gyllenhaal sums up the harsh realities that we’re facing within our current world’s climate with the strongest words, while keeping the film in perspective: “This wasn’t a heroic movie. This was a very practical movie.”

Interviews
Maleficent doubts her fitness as a mother. So did Angelina Jolie
906 views