Saw 'Give Til It Hurts' Blood Drive: Oct. 23 @ Lionsgate Films 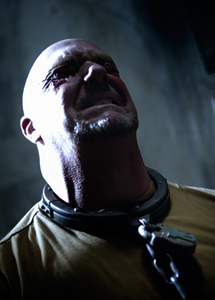 During the goriest time of the year, America’s largest blood organization and a top independent film studio are combining efforts to help save lives. Lionsgate and the American Red Cross have teamed up once again for the Fourth Annual Saw “Give Til It Hurts” blood drive.

The event has blood oozing from veins for a good cause. What’s more, the drive is themed after the horrifying movie franchise, Saw, which began in 2004.

For those who thought Jigsaw was through, think again. Writer-director of Saw II, Darren Lynn Bousman returns to direct the fourth installment.

Saw IV continues with Jigsaw’s crazy mind games and disappearance acts even after he and his apprentice Amanda had been claimed dead. When a SWAT member who has yet to experience Jigsaw’s horrific puzzle suddenly disappears, two FBI agents and a detective are thrown into Jigsaw’s maddening game, leading them to his future sinister plans.

As the Saw trend grows, so too have blood drive participants. Blood donations have risen since the 4,200 pints collected during the first “Give Til It Hurts” drive. Over the years, a total of 38,000 pints of blood have been donated, which has helped to save an approximate 112,500 lives.

Saw IV’s stars Tobin Bell, Betsy Russell, Lyriq Bent and Costas Mandylor, along with producers Mark Burg and Oren Koules and Lionsgate staff and executives will participate. For those wanting to contribute, the America Red Cross truck will be parked outside the Lionsgate studio’s parking lot.