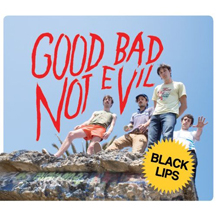 Good Bad Not Evil would be a slight test for the band’s audience were it the records and not the infamous live shows they craved. The band is now dabbling outside of its bluesy garage rock bubble, and though the humor mostly remains, the sloppy DIY mentality is somewhat laid to rest. Highly distorted, cheap production has given way to complete clarity, meaning there are now audible voices and lyrics to consider.

On one hand, Black Lips no longer remain a generic garage rock band – this release isn’t just another in an unvarying, reliable line, though there are fuzzy drum rolls, bluesy bass lines and ’50s harmonies as expected. But songs here like “O Katrina!” lack the urgency of, say, any live rendition, which captures much rougher harmonies and growls. And “Veni Vidi Vici” is a straight up pop song that somehow doesn’t belong.

The men of Black Lips are no longer the (teenage) boys they were, and we’ve now got proof that they’re finally being noticed after seven years of recording together.