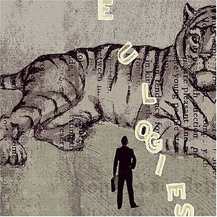 Whenever I think of the word eulogies, the thought of a funeral comes to mind. Unfortunately, that’s also what comes to mind while listening to the self-titled debut album from the recently formed, three-man band, Eulogies.

It’s actually been awhile since I’ve been as bored with an album as I was with this one. Drummer Chris Reynolds produces some good beats, but it’s frontman Peter Walker’s dull vocals that lack the pizzazz needed to engage the listener.

Eulogies was temporarily redeemed on “Running in the Rain,” a cool tune with smooth rhythms, but titles like “Blizzard Ape” and “Under the Knife” didn’t help me connect with this album.