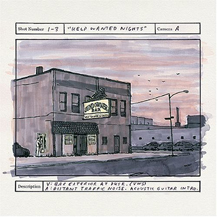 Whether he’s with Cursive or the Good Life, Tim Kasher tells it like it is and feels it as it comes. Help Wanted Nights was originally intended to be the soundtrack to a screenplay written by Kasher, and after hearing the album, I’m dying to see the movie.

The band’s last release, Album of the Year, was a series of stories of a yearlong romance. Help Wanted Nights’ songs are all meant to take place in a small town bar and detail moments of emotion and connection on a more isolated level.

You can see the growth and experimentation with each new album the Good Life put out. Yet, they still manage to sound like themselves and no one else – though “Heartbroke” could have been pulled from an undiscovered Magnetic Fields album.

Help Wanted Nights is a startlingly beautiful record with moments of tenderness and sarcasm alternating between half-full mugs of beer and warm glasses of whiskey.