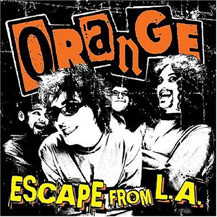 Los Angeles outfit Orange claims to be punk, but that’s quite an iffy declaration. Less punk than their image exudes and more of a second-string My Chemical Romance, coupled with the pop melodies of New Found Glory, Orange’s Escape from L.A. could be the epitomic soundtrack to the next volume in the American Pie series and will definitely fit perfectly in any of MTV’s pseudo reality shows.

The quartet’s pop-punk appeal lacks any real essence or message, except perhaps the comical and slightly political “Republicans,” where vocalist Joe Dexter yelps, “I hate Republicans, and if you’re one, I hate you too.” Though the band is not a political unit, the anti-system notions are quite obvious.

Punk? No. Pop? Maybe. Pop punk? Most definitely! Let’s be honest: Would a real punk band, say Crass or the Misfits, cover the Culture Club’s “Karma Chameleon,” as Orange did, badly at that? Doubt it. Maybe pop’s the new punk.

At least Orange is catchy and aren’t afraid to show it, see “The Last Punk in L.A.” and “Too Scared to Fall in Love.” Still, the band’s catchiness couldn’t make up for an all-too-familiar pop-punk sound.

Escape from L.A. is currently available.