Things We Lost in the Fire: (DreamWorks) 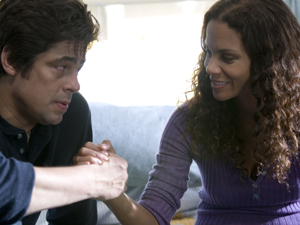 Two people, Audrey Burke (Halle Berry) and Jerry Sunborne (Benecio Del Toro), are brought together by the death of a loved one. Through the development of their characters after suffering this loss, Things We Lost in the Fire shows two people finding the strength to move forward in life after death.

The film at first is so depressing I wondered how I would ever get through it. And though Halle Berry gives a sufficient performance as a widow in the midst of grief, it’s Del Toro that steals the show and captures viewers’ attention as the film unravels. As a recovering heroin addict, he adds an element of humor and realness to the movie that stands out from performances from his past.

Slow at first, Things We Lost in the Fire is worth watching to the end. It realistically shows the anguish experienced after the loss of a loved one and highlights an important lesson: to each day focus on the good things in life.

Things We Lost in the Fire releases in select theaters Oct. 19.