Why Did I Get Married?: (Lionsgate) 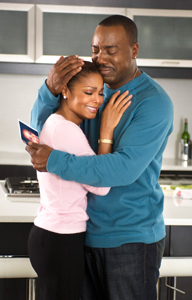 It’s an eclectic mix and perfect pairing in this likable romantic flick dealing with the dynamics of marital relationships. The movie’s characters – a collection of mostly good-looking, successful former college friends – consist of Janet Jackson (making a welcomed return to the big screen), singer Jill Scott and Tasha Smith.

Jackson plays a psychologist while Scott is the insecure, overweight buddy who’s saddled with a cheating husband. Expect lots of humor, especially from actress Smith (last seen in director Tyler Perry’s previous offering, Daddy’s Little Girls) as Angela, a brash, outspoken character that sets the story in motion when she unearths a scandalous secret at their annual couple’s retreat.

Despite a formulaic plot, it’s blunt, racy, with dashes of undeniably gut-wrenching humor and a worthwhile viewing experience.

Why Did I Get Married? is currently in theaters.