More Than Coffee: In honor of “Entourage’s” Medellín, here’s a glimpse of Colombia’s rich blend of beauty and fun. 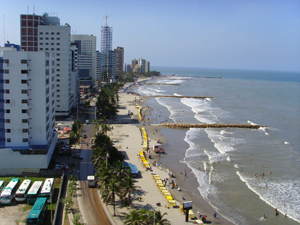 For most Americans, two things probably come to mind when thinking of Colombia – the taste of the world’s favorite coffee and the country’s much-publicized drug woes. Colombians realize that they have a bad reputation to overcome, and they’ve really done their part: the drug lords are gone, city streets are safe to walk and perhaps most important, the people are anxious to show off their culturally diverse and modern country.

Medellín is a huge, sprawling city located high in the Andes Mountains. A good place to start your day is at the Museo de Antioquia, a museum that houses a great deal of works by Colombian artist Fernando Botero.

Botero’s paintings feature subjects that are “big” as in overweight or oversize, a characteristic that makes his art instantly recognizable. Much of Botero’s work is whimsical by nature, and some of it is downright naughty.

Right across the street is Botero Plaza where about a dozen of the artist’s giant bronze statues populate the grounds. This is also a good place to buy a knock-off Botero painting.

The city has a good train system; you’ll want to hop on the Metro de Medellín and head for the Metrocable aerial tramway station where you can ride the tram up to one of the highest populated areas in Medellín. You’ll want to ride all the way to the top for a stunning scenic view. Find a little goodie stand that has some outdoor seating, order a beer and watch the world go by.

When it gets dark you’ll want to be in the Lleras section of Medellín. Lleras has trendy restaurants and nightclubs, not to mention dozens of boutiques that feature items designed by hip, young Colombian designers.

The Rumba goes on until the early morning hours in Lleras. At hot spot Vox you can dance to live rock music and DJ’d Latin beats.

Cartagena, located on Colombia’s Caribbean coast, is a bit laid-back compared to Medellín. The cars and motorcycles still zip around, but it’s hard to concentrate on anything too serious when you have the beach in sight from just about anywhere in the city.

The shopping in this area tends to be more touristy, but you can spend some serious cash here too if you’re interested in fine gemstone jewelry. Colombia produces about the highest quality emeralds that you can get anywhere in the world.

While portions of Cartagena are very modern, the settlement itself is ancient: the Spanish built a walled city here starting in the 16th century. A good portion of the walled city is still intact.

Amongst the historic buildings and landmarks you’ll find all types of restaurants, shops and countless little alleys and nooks. One place not to miss is the Palacio de la Inquisición, a museum and memorial for victims of the Spanish Inquisition.

Another must-do in Cartagena is to take a coach ride up to the scenic overlook where you get an unparalleled view of the entire city. And don’t forget to drink some coffee!