Dorm Gourmet: Spice up your cuisine with the help of farmers markets. 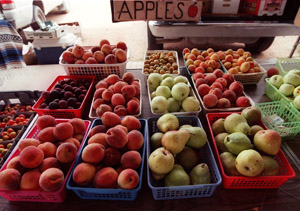 Freshman year of college is the beginning of the only period of your life where the stars have aligned to guarantee you four years of relative freedom sans the burden of responsibility. As long as your schoolwork gets done and your academic advisor isn’t knocking your door down to figure out why you’re flunking out, you’re home free. The real world is still years away.

But the transition from the preplanned package of high school to liberated college life is not always an easy one, especially for those whose home isn’t exactly a hop, skip and a jump away. That first bout of illness that nobody’s around to take care of you for, the alarm that didn’t go off or that meal only your parents make just right are some of the countless things a freshman is bound to miss from home, adding to the stress inherent in any big life change.

Though we can’t hover over you to make sure you’re on time to that first 8 a.m. class, there are one or two culinary tricks that you can pull off right from your own dorm room that’ll make home just a little closer and break you out of that dining hall you’re already loving to hate. As long as you’re here, you might as well capitalize on the best California has to offer.

But first: the supplies.

If you haven’t figured it out yet, California is the land of plenty when it comes to great food, and Southern California has the distinction of being right next to most of the agricultural land, not to mention the Santa Barbara wine country.

What does this all boil down to? More produce than you can shake a stick at, and all of it gathered in farmers markets just a stone’s throw from your campus. Seriously, when you live in a place like this, sometimes the bedraggled vegetation at the Ralph’s down the street just doesn’t cut it.

Of course, the first market you’ll hear about is the “Original Farmers Market” next to the Grove shopping center. Though this is a wonderful place to grab a quick bite to eat, it’s fairly inconvenient to get to from any of the major campuses in the area and has a pre-packaged feel, lacking the variety of farmers you’ll find in other places.

So break out of the norm. Even doing a quick Google search for farmers markets in the L.A. area will provide you with enough to keep you busy every day of the week, quite literally, and they’re all very simple to get to with or without a car.

Of course, the trick to farmers markets is that they force you to cook seasonally. Health gurus have been touting the concept of organics and sustainable cooking for as long as the vocabulary has been around – essentially, the things that come out of the ground at their appropriate time (not tricked by hot houses) are better.

I won’t claim any form of guru status, but there’s something to be said for the flavor of farm fresh food and the fact that you’ll probably never find it in any campus kitchen. With that in mind, it’s time to tackle the concept of seasons.

This season is fall. You may not know it because Los Angeles, and the rest of California doesn’t oblige you with the poetic notions of changing leaves and bursts of autumn colors, but we are well and truly in the midst of whatever facsimile of a season the Golden State can provide.

And you know what that means?

Vegetables. Vegetables of the variety that dress any self-respecting Thanksgiving table, like butternut squash, pumpkin and corn, and then a few more delicate items along the lines of artichokes, broccolini and spinach.

The biggest trick to cooking in a dorm room is obviously a lack of the normal amenities usually afforded to you in a home kitchen. You know, small details like stoves and ovens. That can be particularly tricky when many of the main ingredients of the season generally call for slow roasting, especially things like pumpkins and squash.

The rest, however, lend themselves beautifully to steaming, which can be accomplished quickly and easily with but two readily accessible pieces of hardware: a microwave and Tupperware. And, if you’re really desperate for that good old pumpkin flavor, it comes in cans that you can find in even the worst stocked grocery stores. Talk about convenience.

There are a few tricks to steaming food. The first is to prevent your fresh ingredients from getting waterlogged. The second is making sure you’ve packed as much flavor into your food as you can, as early on as possible.

Steaming is best accomplished with as little water as you can get away with, which means the best tool in your arsenal is going to be a shallow, long Tupperware container that will easily fit most vegetables you come across. If the veggie doesn’t fit, chop it up. By putting a shallow layer of water down as a base, you’re assured even steaming without drowning your vegetation.

To address problem area No. 2, your best bet is to make sure that your steaming liquid of choice isn’t pure water. That means throwing in punchy flavors, which can mean something as simple as a shot of lemon juice for a clean, perky finish, or employing the wide variety of fresh herbs you’ll find at the farmers market to add complexity.

Take your basic broccoli or broccolini, for example. Steam in a little bit of water with some lemon juice until it’s cooked through. At this point, discard the water and dry the broccoli off a bit. You could eat it this way, put on a pre-bought dressing or do something daring like melt cheese over it, also easily accomplished in the microwave.

For an Asian twist, peel up a piece of ginger and throw it in microwave-warmed water with some red chili flakes. Steep in the hot water for flavor and then steam your vegetables in the flavored liquid, leaving the ginger and chili behind. Whip up a quick (heat-free) peanut sauce and you’ve gone gourmet in the comfort of your dorm room.

While cooking vegetables can be a pain, using fruits and veggies in recipes that don’t require the heat element is probably not only preferable in a dorm room, but even more delicious because it tastes fresher.

Take guacamole, for instance. Out of simple ingredients comes a great addition to toast or chips, or a flavor boost on any form of burrito (easily pulled off with pre-cooked chicken found in any grocery store and canned beans warmed with a little Tabasco sauce thrown in for punch).

Though avocados aren’t in season in the fall, tomatoes certainly are. I like to make a salsa/guacamole hybrid, using almost a 50-50 ratio of tomato to avocado. It results in a considerably chunkier texture, rounded out with some freshly minced garlic and jalapeno along with another dash of lemon or lime juice.

The most basic application of this is nachos. Take some fresh cheeses (available at farmers markets or grocery stores) and melt them onto chips sprinkled on a microwave safe (preferably paper) plate. Liberally dab your guacamole salsa on top and enjoy. Salads are another obvious application of farmers market goods, but can be surprisingly satisfying if pulled off with a little creativity.

Even though lettuce isn’t technically in season, spinach certainly is, so keep a lookout for it. Spinach salads are more flexible than traditional salads because they’re robust enough to stand up to hot dressings, and any wilting is generally considered a good thing.

Store-bought dressings are certainly acceptable, but in addition to produce items, farmers markets carry a plethora of locally produced cheeses, honeys and foodstuffs that make it easy to put twists on old things. Try making a quick honey-dijon dressing, tossing in some crumbled blue cheese and walnuts you grabbed with the spinach that day.

Local honey is always a good idea, especially if you’re an out-of-towner with a penchant toward allergies. Honey, which is obviously connected to the pollen the bees use to make it, helps the body build up a natural resistance to allergens in the area. Go figure: a good meal and homeopathic cure all in one.

Beef up your salads with a chunk of store-bought chicken or take a can of tuna and mix a tablespoon or two of salad dressing in before tossing with the rest of the ingredients. Added protein makes for a hearty meal and gives that flavor component you might have otherwise been missing.

WHERE TO FIND IT: A FEW EXAMPLES

Downtown actually has a few farmers markets of note, but the most famous of these are the two located in the Financial District and Chinatown, respectively.

The Financial District hosts the largest market, springing up every Wednesday between 11:30 a.m. and 2 p.m., with over three dozen vendors. Located on 5th Street near the central library, the market plays home to not only a wide variety of produce sellers, but also to local dealers in arts and crafts and prepared food.

Since walking there takes about two hours from the area’s nearest big campus, USC, I would suggest driving (parking is cheap at the library if you have a library card) or, better yet, grabbing the DASH F-line at Jefferson and Hoover. One of the prescribed stops is 7th and Figueroa, a mere two blocks from your ultimate destination.

A second one in the downtown is the Chinatown market. This one has a notably different selection of wares with a, you guessed it, greater Asian influence than the one on 5th.

Check it out for a change in flavors and styles, keeping in mind that there is no cuisine that lends itself better to a quick microwave steam than Asian food. It’s located in a parking lot on 727 North Hill Street and opens its parking lot every Thursday from 4 p.m. to 8 p.m.

The Westwood Farmers Market is a high-end establishment located in the Veteran’s Garden near the Jackie Robinson Baseball Stadium. This is a market that hosts not only fruits and vegetables, but also specializes in quality food products like artisan breads and pastries.

The market houses 30 vendors from which to choose, a great deal of which is devoted to their fresh food court which will undoubtedly make you glad you walked the 2.5 miles to get there.

According to the UCLA Athletics department, the farmers market is most easily accessed the same way you would to get to the stadium, located at 100 Constitution (although there is a considerable amount of parking, so drivers should not be dissuaded). To get to the market, walk down La Conte Ave. and through the Veteran’s Cemetery, then across Sepulveda to the stadium.

It really doesn’t get easier than at Loyola Marymount. They brought a farmers market to them.

It runs on very specific days from September into April and is on campus at the Alumni Mall, no directions necessary. The market features primarily fresh food, but also has a great deal of handmade goods and handicrafts along with flowers.

A big selling point of this market, beyond its accessibility, is its emphasis on social justice. Along with your various market goods, you’ll be exposed to a number of organizations and movements to educate and inspire.