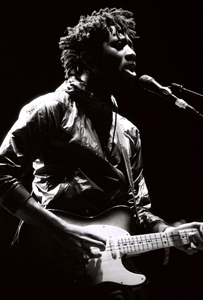 One square block of downtown Los Angeles surrounding City Hall was shut down to facilitate L.A. Weekly’s second annual “Detour Festival.” Thousands of people crowded the normally traffic congested streets to see acts hitting every genre of the musical spectrum, complete with a touch of comedy. Four stages ranging in size were strategically placed to accommodate the 30-plus bands and DJs that entertained the masses.

The former Jane’s Addiction frontman you just can’t seem to get away from Perry Farrell’s latest project, Satellite Party, was the first of the two “party” bands playing that evening. As the sun set, Farrell dished out new Satellite tunes as well as some old Jane’s Addiction tunes, which finally won the crowd over.

France’s own electronic duo Justice was the first of the two headlining acts to break bread. Performing a DJ set, they spun dirty analog remixes of Three 6 Mafia and Klaxons, as well as some of their own seam-splitting tracks. They shockingly closed with an original of the old sing-along “Build Me Up Buttercup,” bringing the thousands of onlookers to sing in complete unison.

As Justice finished their hour-long set fans rushed to the large stage down the street to see the second headliner, Bloc Party. For almost an hour and a half the band slid through almost every track it had to offer, trying to get some energy out of the lackluster crowd.

The night concluded with almost the entire close-knit Ed Banger Records crew, consisting of DJ Mehdi, Busy P, So Me and Sebastian & Kavinski, tag teaming the decks for the second time that day. The ridiculously loud bass broke down the tired folks as they left the grounds with ears ringing, hoping the lineup for next year’s Detour Festival will be one louder.