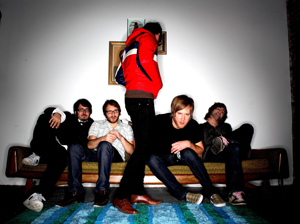 Go ahead – call them a pop band. That’s what they have the humble confidence to call themselves.

If you take the time to wade through the clogged pores of the Los Feliz/Silver Lake indie music scene, parting the seas of pretension and expensively torn T-shirts, you’ll uncover a seed of truth. One band is talented, intelligent and confident enough to say, “We are not afraid to be a pop band.”

These hustlers among men are better known as Castaneda – five guys who just want to make you move your feet. Vega, Rob, Sasha, Dana and Warren won’t discuss their day jobs, but they’re more than willing to discuss in certain seriousness the fate of Castaneda.

With the band’s one-year anniversary coming up in December, they still remember fondly their first gig at Safari Sam’s. Their harmonious combination of electronic synthesizers, actual instrumental talent and sheer energy levels only make their pointed lyrics and mysteriously soothing vocals more potent.

Out of respect for Castaneda, we’ll refrain from comparing them to any contemporaries you might know, but combine that unstoppable shameful urge to move (your feet, your hips), with a slight tug on your heart strings, and these guys have found your weak spot. With catchy drumming that packs an artful punch, the choruses of clapping and crescendo instrumentals that power songs like “Radio” are hopelessly addicting.

Though under no false pretenses and no claims of a deeper message, the members of Castaneda are the hardest working multi-taskers in Los Angeles.

“We want to max out when we are as big as we can be,” the members agree.

With working days that average 15 hours, they’re well on their way.

“Basically, we all hate our day jobs and want to just play music,” the crew says.

While seeming like a fairly typical dream for many aspiring bands, Castaneda makes you believe it. Though I still want to borrow about half of their sweaters and all of their fresh high tops, this band differentiates themselves from the hipster pack with solid heads on their shoulders and an old-fashioned, blue-collar work ethic.

“Our ultimate goal is to deliver music to the world,” states drummer Sasha.

Don’t laugh and don’t doubt him for one second, because regardless of money or incentive, Castaneda declares with commitment that they’re doing a European tour if they have to plan and pay for everything themselves. With only 10 months under their joint belt, Castaneda has been everywhere from Los Angeles, Vegas and Texas, and continue to play more shows than there are daylight hours.

I’m lucky enough to talk to these five on a very special day, as they gear up to sign their first publishing deal with the help of who they call a “real friend,” lawyer Robert Reynolds. Reynolds, better known for handling a little band you might have heard of called the Killers, will usher Castaneda into a whole new bracket of possibilities, as their songs will spread from the radio to TV shows, films and commercials.

Upcoming Freddie Prinze Jr. indie flick Jack and Jill vs. the World hosts two Castaneda songs, and by the sound of it, two was hardly enough.

“The director, Vanessa, got a copy of the CD and freaked out,” the band mates express their genuine excitement at their involvement on a film soundtrack. “We’d like to hear Castaneda songs in anything substance filled. Pretty much anything but fast food commercials.”

My heart actually melted after watching Castaneda’s self-edited video of their trip to play Austin. I came to a drastic realization: these guys’ complete sense of normalcy and feet on the ground would require anyone to give them a second glance.

And so I did. And a third. And a fifteenth.

When I asked them what else people should know about them, giving them an opportunity for a shameless plug or a hefty political message, they told me to say what I wanted.

“Pick a song that you like, and talk about it.”

The members of Castaneda have the veteran experience and the unyielding honesty to prove that someone in Los Angeles still tells the truth. And man, is it catchy.

Castaneda will perform Oct. 20 at Vertigos in Los Angeles and Oct. 26 at Minx Lounge in Glendale. For more information, visit www.myspace.com/castanedaband.

LA Underground
OctafellaSoul: Born in a Back Alley of Los Angeles
3,104 views

LA Underground
The Material: Tools of the Trade
5,376 views