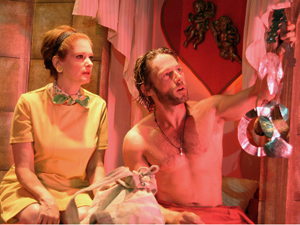 A handsome stranger wanders onto a fortified villa on the Amalfi Coast of Italy causing chaos in his wake in Tennessee Williams’ “The Milk Train Doesn’t Stop Here Anymore.” The attractive drifter, Christopher Flanders (a superb Michael Rodgers), a poet and artist, scales the Olympian heights to meet a dying dowager, Mrs. Flora Goforth (Karen Kondazian).

Goforth is a rich, sharp-tongued harpy attempting to defy her impending death by dictating her memoirs to her meek secretary, Blackie (Lisa Pelikan). Goforth barks orders to her staff during the day and howls in pain at night.

Convinced the poet’s a con man, Goforth summons her longtime friend, the Witch of Capri (deftly played by drag diva, Belle Aire, a.k.a. Scott Presley) to assess the man’s motives. The witch recognizes the man from a previous event; she calls Flanders the “Angel of Death” due to his past dalliances with rich, dying old women.

Goforth struggles with her mortality, and Flanders struggles to find a brief respite from a life of hardship. The two clash loudly and violently. She desires the young man sexually, but he requires only companionship. He believes that Goforth must learn to trust again before her coming demise.

In 1963, Williams’ plays shocked theatergoers with his lusty wicked characters, yet something is lost in translation on the modern stage. In a society in which Paris Hilton, Britney Spears and Lindsay Lohan shock the public with their daily antics, “Milk Train” pales in comparison. Modern audiences may yawn at Goforth’s lustful pill-popping boozehound.