Premium Jeans Tick Up In Price 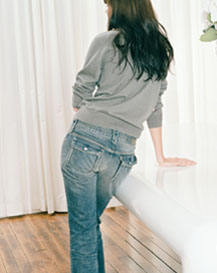 These days, it’s denim that’s a girl’s best friend – and a guy’s too.

A cocktail of sewing tricks, wash treatments and stretch fabric contours the legs, lifts the caboose and makes peeping thongs an indelicacy of the past.

"There’s nothing more intense on any product you buy that makes you feel one way," said Thomas George, owner of E Street Denim in Highland Park, Ill. "But we often say, the most important thing in our jeans is you."

A tracker of brands from Levi’s to True Religion, Julia Kim believes in that philosophy.

"I’m an Asian girl and have no butt, none whatsoever," said Kim, who is publisher of Handsblue, a new denim-lifestyle Web magazine in New York. "I have to stand in a certain obscure pose" to simulate curves, she said, laughing.

So one of her favorite brands is Miss Sixty, which the Smashing Pumpkins’ former guitarist Melissa Auf der Maur and assorted models/rock stars also wear.

"They’re not the trendiest but they make your legs look really long," she said. "If you’re really slender and don’t have bumps, then your legs had better be eight miles."

Those seething with envy at Kim’s plight might find consolation in James Preserved Denim, Seven for All Mankind and Citizens of Humanity, which aren’t tailored to the slight of rear – James jeans, in particular, Kim found.

"I looked like a pancake (in them)," she said. But people with a little fuller figure, it contours nicely. They love it."

The category of premium denim, which starts about $75 per pair, represents just 3 percent of the total denim market, according to Marshal Cohen, chief industry analyst for the NPD Group. But premium brands set the trends that mass ones pick up as fast as they can.