All Time Low: Chart the Ups and Downs of Songwriting 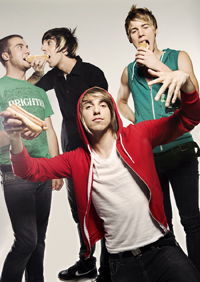 “It’s not really music as much as it is scattered noise,” says All Time Low drummer Rian Dawson of his band’s latest album, So Wrong, It’s Right. Though joking, he and his band mates have heard far worse from critics and audiences and are no strangers to being both panned and lauded by both in the same breath. Nevertheless, the Maryland natives welcome what their detractors have to say about them.

In fact, “We celebrate it,” says frontman Alex Gaskarth with a self-aware grin. Even so, writing and recording So Wrong saw the band, including guitarist Jack Barakat and bassist Zack Merrick, take themselves outside of their comfort zone.

“It was different from anything we had ever done before; we’d never worked with a producer before. On the first day of production, [producer Matt Squire] was like, ‘Yeah, we have to condense this.’ Most bands go in with like 50 songs, have to cut it down to 25, then cut it down from there. We were working our way up from three,” says Dawson with a laugh.

“Going into it, we had this huge fear that a producer would be like, ‘No, you’re not doing that, do this instead,’ telling us what to do, so we were really terrified of Squire,” Dawson adds.

And though they may have gotten off to a rough start under his watch, the band found that, contrary to expectation, working under a producer wasn’t such a bad experience after all.

“It was like having a loose second opinion; It really helped, especially when it came down to lyrics and the vocal stuff,” says Gaskarth. “I always second guess myself, so I’d end up not being able to write the lyrics until the very last minute. I’d usually be in the vocal booth writing out a verse, but the added pressure worked out well.”

“There was a lot of pressure, especially for Alex,” agrees Dawson. “The music all fell into place, but when people listen to this music, they don’t care about what the drums or guitars are doing, they care about lyrics and melodies. We stayed in the studio about two months longer than we were supposed to.” Ultimately, both Dawson and Gaskarth feel the effort was worth the final product.

“We set out to make a really solid pop punk record, and I think that’s what we achieved,” says Gaskarth. “We want people who didn’t ever like pop music to like pop music. We tried to make something as ridiculously infectious as possible while maintaining that this isn’t Hilary Duff.”

“We’re not trying to set ourselves apart as some crazy, innovative, groundbreaking band. We’ve never wanted to do that,” he continues. “It was always to just have fun and have people put us in their CD player and say, ‘I want to dance to this.’ Maybe we’re meant to be that cliché band, but as long as people like us, I don’t really care.”

That said, for all his confidence and proclaimed indifference to skeptics, Gaskarth admits a bit of anxiety while awaiting the masses’ reaction to the album.

“We’ve built a lot of hype on this record, and I only hope it lives up to it,” he says. “That’s the one thing I’m nervous about. When you build up something so big, I just hope we don’t disappoint.”

If the exponentially growing number of kids who learned the words to “Dear Maria, Count Me In” weeks before So Wrong had even unofficially leaked are any indication, Gaskarth hasn’t got much to worry about. And with a solidly booked tour schedule for the remainder of the year, those numbers are only looking keep growing.

Gaskarth wouldn’t have it any other way: “The way I look at it is if the worst part of my job is being tired because I’ve been traveling the country, meeting all these people and playing for crowds of hundreds of people every day, then I have a pretty sweet job, so I really can’t complain.”

So Wrong, It’s Right is currently available. The band will perform Oct. 20 & 21 at House of Blues Sunset Strip. For more information, visit www.alltimelow.com.