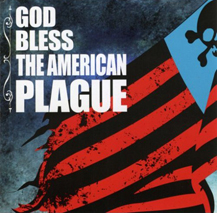 Knoxville, Tennessee’s the American Plague convincingly hybridizes proto-punk, hard rock and country-punk on the band’s sophomore release, God Bless the American Plague. Singer James Alexander, known to fans as Jaw, comes across like a mix of Motörhead’s Lenny Kilmister and Social Distortion’s Mike Ness. Topics that include suicide, warfare, death, and violence also show a distinct debt to influences such as the Stooges, the Misfits and Black Sabbath. Sonically, the group doesn’t attempt to better their antecedents, and maintains a hopped-up fusillade of speed and attitude. Drums and bass are tough and deep, twin guitars form a two-pronged attack, and vocals are gnarly as weed killer. The American Plague’s catchy melodies are also a plus on numbers like opener “Sympathy for the King,” although a superfluous cover of Motörhead’s “Ace of Spades” is less than stellar when compared to the superior original version.