Lakers & Clippers Season Preview: And a Few Other NBA Teams to Watch... 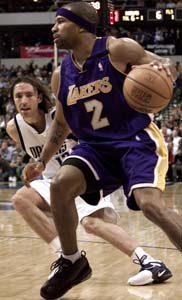 While most NBA seasons start with a Lakers preview that boasts words of confidence about the upcoming season and the challenge of contending for their elusive 16th title, the truth of the matter is that this is not a great year to be confident. The Lakers are coming off their second straight playoff run ending at the hands of their talented division rival, the Phoenix Suns. Since getting knocked out of the playoffs in June, there has been nothing but noise coming from disgruntled players, coaches and owners; nothing but trade rumors that won’t happen and improvements that won’t be made.

Now the latest news out of their summer training camp is that Kobe has packed up his locker and decided to go home, which may or may not be true depending on whom you ask. What is true is that owner Jerry Buss is finally willing to move him to another team. As of now, it seems like this season will end the same way it has the last five years – poorly.

If there is a silver lining to the season ahead, it starts with the signing of Derek Fisher at the point guard position. Fisher takes over for the inconsistent, and at times incompetent, Smush Parker who was cut only days after last season ended.

While Fisher will never be considered a premiere guard in the league, the fact that the Lakers run a triangle offense that doesn’t necessarily rely on the point guard position helps, as does his veteran leadership, consistency on defense and his low turn over ratio.

It also helps to have the former UCLA guard, Jordan Farmar backing Fisher with his unselfish play and strong athletic ability. Because of this both players will greatly improve the position and make for a team that is more prepared to step on the floor with the likes of Phoenix or Dallas looking down at them.

Also, while no one wants to see Kobe moved out of town, especially after how he has played for the Lakers over the last 10 years, Kobe Bryant’s no trade clause may prove to be a blessing in disguise. Since it’s unlimited, Kobe has full right to accept or reject all trades involving him over his next two years with the Lakers and his desired destinations are contenders Chicago and Dallas.

With Kobe’s inflated contract, both teams would have to give the Lakers a similar deal that Minnesota got for Kevin Garnett; a deal that would include a lot of solid young talent and help at numerous positions. The possibility of bringing around key players like Josh Howard, Luol Deng and Ben Gordon, as well as having the necessary funds to chase more specific talent would make the Lakers contenders almost immediately. A trade like this would also make sure that they competed for years to come instead of pinning all their hopes in the next two years with Kobe.

Do not expect the Lakers to be anymore than a mirror image of last year’s team. There will be flashes of brilliance and terrible times of misfortune to go along with a six to eight seed and a first round exit.

Once Kobe is in another area code then the Lakers can start to talk about how to truly contend. While basketball is purely entertainment for most fans, it remains a business. You still have to spend money to make money – but you have to spend it in the right areas.

Sadly for the Clippers, the story seems no less grim. While the Clippers were one win away from their first ever Western Conference Finals two seasons ago, injuries to Shaun Livingston and Elton Brand have what was an up ’n’ coming young team now on the ropes. With four of their starters in the last year of their contracts, it’s likely that a number of key players will walk away for better teams and better offers if the season does not end on a positive note for the Clippers.

Still, the Clippers are faced with an interesting situation. Injuries have turned them into a team of role players in a league that has lately been defined by overrated superstars killing good teams.

While boasting the best bench in the league may not get the Clippers a championship banner to hang amongst the purple and gold of the Staples Center, they should be able to compete if each player focuses on the his job at hand. They have the three point threats, the rebounders, the shooters and set up men – they just don’t have the All-Star recognition.

If Elton Brand can make it back after the February break, there’s no doubt that the Clippers will be able to contend for a low seed in the post season and a positive future after that. They may even surprise their first round opponent.

Whatever the case may be, the Clippers have spent the last couple years drafting smart and playing good basketball. Hopefully they won’t let a few injuries ruin a good thing. As for the rest of the league, watch out for the usual championship contenders in Phoenix, Dallas and San Antonio. Check in to see how long Miami will have Shaq this season and how long Lebron stays in Cleveland when his General Manager is unwilling to resign important role players.

Keep an eye on Boston to see if they can compete with an aging Kevin Garnett and an open space at point guard. Watch to see if Memphis can bounce back, the Rockets can stay healthy and if Kevin Durant can simply keep the Supersonics in Seattle. Last, keep an eye on Chicago, because with or without Kobe, they’re going to be really fun to watch.