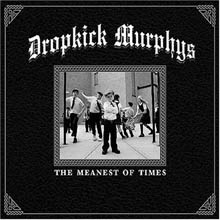 One of the rowdiest Irish heritage punk bands, Dropkick Murphys make music to dance and drink (a lot) to. It might be difficult to distinguish though, when you’re stage diving at the local rock bar or moshing around your living room, that the band has plenty to say, too. Maybe it’s just as well if you play this one while you’re half sloshed; the message here is not one of contentment.

On “(F)lannigan’s Ball” the band borrows the title of a traditional Irish jig but the song is about prison recidivism, cleverly likening the jig’s dance moves to a jailhouse revolving door: “I stepped out, and I stepped in again.” The song’s message is one of hopelessness, but it rocks hard Irish-style and is destined to become a Dropkick Murphys showstopper.

Elsewhere the band rails against the church with “Tomorrow’s Industry” and reiterates the traditional Irish anti-war ditty “Johnny, I Hardly Knew Ya,” the tune that Americans know as “When Johnny Comes Marching Home.” Bad for thinking, but good for drinking; tap the Guinness and let yourself go.

Grade: A The Meanest of Times is currently available.