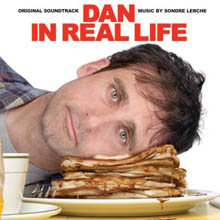 Taking a cue from Simon & Garfunkel’s monopoly over The Graduate’s soundtrack, Sondre Lerche has written the soundtrack for the film Dan in Real Life. The 25-year-old Norwegian singer returns to his signature folk/pop sound in this album after the jazzy Duper Sessions and the rock-influenced Phantom Punch.

Dan in Real Life features mostly new material from Lerche, with three previous songs appearing, a cover by Lerche and another cover by A Fine Frenzy. It seems like Lerche’s experimentation with other styles has refined his sound for his newest music, creating a folk and pop hybrid with tinges of the jazz and rock from his previous two albums.

Don’t let Lerche’s mellow and warm voice fool you, though – his voice brims with enthusiasm and emotion. Even the instrumental tracks are beautifully written, although they suffer a little without Lerche’s voice and lyrics. Nevertheless, Lerche doesn’t disappoint in his Simon & Garfunkel-esque career move.