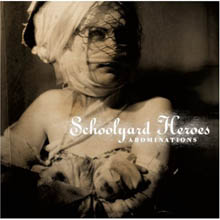 This has to be Aimee Echo’s (Human Waste Project, the Start) new band! Alas, it’s not, but it is a similar sounding four-piece from Seattle, featuring an attractive female lead singer and a guitarist with a large Mars Volta afro singing “horror rock” songs about death and dismemberment.

While singer Ryann Donnelly seems to often rely on the somewhat cutesy-whiney female rock voice, she can really sing. Abominations features the obligatory quiet song, a ballad if you will, called “The Last Man on Earth,” which really shows off Ryann’s vocal talents. The following track “Razorblade Kisses” snaps the listener back into it with a pounding intro by drummer Brian Turner and some poignant squeals by Donnelly. If the music doesn’t draw you in, the lyrics are equally as entertaining with classics like “Your lipstick tastes like murder.”

“All the Pretty Corpses” has a tremendous guitar solo intro, and to top off this Rocky Horror-like soundtrack, the aforementioned “Theater” ends the CD with a campy duo with Ryann and an undisclosed male (which could be bassist Jonah).

This CD is entertaining. If you’re a fan of female rock singers and “horror rock” bands that don’t take themselves too seriously, I recommend Abominations.