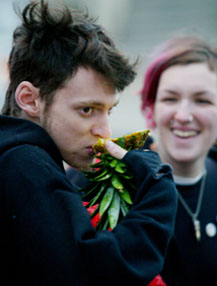 All fragrant, ripe, ready to eat.

And all plucked out of Dumpsters by a squad of young friends who feed on the edible treasures they find in the garbage of North Jersey’s restaurants and markets.

They’re known as freegans – though Dumpster divers might be more apt. They have the resources to buy their food, but they prefer harvesting it this way to make a political statement.

"It feels good when you watch all those people paying for food," Jeff Wiesner, a 19-year-old from Tenafly, N.J., said as he popped a piece of fruit in his mouth. "It’s a Dumpster. You might get a little dirty, but it’s not a big deal."

Wiesner knelt over a 10-pound sack of onions he found in a Dumpster outside a busy market and put several aside – to go with a plastic container stuffed with pieces of cantaloupe and watermelon. Nearby, inside the bins, his friends rummaged through black plastic bags filled with limes, oranges, red peppers and other fruits and vegetables.

Wiesner and his friends – and many others who have also proclaimed themselves freegans – say they are protesting capitalism and the wastefulness they say it creates.

"Being freegan is one way in which we are living a life that is consistent with the kind of world that we want to create," said 26-year-old Adam Weissman of Hackensack, N.J. "In terms of people having ownership of their lives and in terms of consuming in a way that is not destroying the planet."

Garbage pickers have been around for years, plucking glass, furniture, books, computers and mattresses from the curb. The idea of dining on food found in garbage may be just as old, but the practice is often associated with the needy.

"There is no history written about it, but there is an assumption that has been made," said Ted Botha, the author of Mongo: Adventures in Trash. "It’s not really a poor thing; people do it for different reasons."

Botha spent three years interviewing people in Manhattan and New Jersey who snatch all sorts of items from the garbage. He found that freegans differ from other collectors because they usually work in groups, share their finds and do their picking for a political cause.

Susan Kraus, a clinical dietitian at Hackensack University Medical Center, said she worries about the health risks of Dumpster dining. Besides food-borne bacteria, such as salmonella and E. coli, food can be contaminated by other types of trash, she said.

"It kind of goes against all the things I learned in school about food safety," she said. "Even though it might be a Dumpster for food, they may be putting supplies they use for dishwashers or other cleaning chemicals."

But North Jersey freegans say they are selective and eat from Dumpsters that are brimming with unsold food that normally isn’t mixed with other trash. The food is usually tossed by supermarkets and restaurants to make room for fresher items. They don’t worry about rodents or other animals, because they have yet to see one, they said.

"I use my senses more than anything else and I find that 98 to 99 percent of the time it tends to be good," Weissman, a former security guard, said of the food.

And there is a lot of food left for the picking.

A 1997 study by the U.S. Department of Agriculture found that close to 96 billion pounds of food – 27 percent of the 356 billion pounds available for consumption – were lost at the retail, consumer and food-service levels. Fresh fruits, vegetables, milk, grain products and sweeteners accounted for two-thirds of those losses.

Those figures are what drive freegans, who usually eat only vegetables, fruits and grains, to continue their crusade.

"There is so much food out there, and you have to learn to make the best use of it now," Saiya Miller, 15, of Wyckoff, N.J., said. "And we need to let people know that it’s not working out and changes need to happen."

In North Jersey, freegans visit mostly restaurants and food markets, but doughnut shops, pizzerias and bagel stores are also on their list. Sometimes the divers ask workers to give them leftovers before they reach the trash, but most times, they jump straight into the Dumpsters.

"It’s definitely really possible to eat healthfully out of Dumpsters and find produce and fresh everything," Miller said. "But it’s also easy to go nuts, because you find whole pizzas, doughnuts. It’s amazing; you really see what America survives on."

Miller started Dumpster-diving when she was 13. It began with old compact discs she would find in the trash of music and electronic stores. But as her finds got better, her urge to Dumpster-dive flourished.

Unlike most teenage girls, Miller hardly buys anything for herself. Her Dumpster sessions are an adventure, she said, and she wouldn’t trade them for a shopping spree at the mall.

But exploring trash for food, books or CDs is not always met with open arms. Divers say they have been stopped, questioned and patted down by police, who chase them away, saying they are trespassing.

"I tried to explain the whole thing, but they just don’t get it," Wiesner said.

Parents aren’t happy either. Freegans say their folks have been alarmed, disgusted and disturbed by their rummaging lifestyle.

And police say that, because Dumpsters are on private property, the freegans are trespassing and could face a disorderly persons complaint from an unhappy owner.

"I would think that owners would be concerned over liability," Paramus, N.J., Deputy Police Chief Richard Cary said. "If you have people going into the Dumpsters, the stores would be liable for anything that happens to them in that Dumpster."

Freegans usually go out at night, when stores are getting rid of their produce and restaurants are cleaning up. Many memorize garbage pickup schedules to make sure they hit the bins before they are emptied. They don’t like to publicize where they search.

On a recent jaunt through Hackensack, clad mostly in black, Wiesner, Weissman, Miller, Pulgrano and Alana DeLiso, 19 of Tenafly, found an abundant mix of greens and fruits at three different sites. At one location, they uncovered pieces of fresh pineapple, kiwi and strawberries.

"It smells delicious," Miller said as she took a whiff of the Dumpster.

After eating the cut fruit, the group headed northwest on Passaic Street toward another supermarket.

But after a few minutes of poking through the metal bins and finding bags of Bonita bananas, grapes and cans of beef broth, they were interrupted by the owner, who asked them to leave. A brief explanation of "freeganism" didn’t sway him, but he allowed them to take the food.

"I just don’t understand it; I don’t want them on my property," said the owner, who declined to give his name.

The divers found dessert behind a doughnut shop. After eating a few sweets from two clear bags full of chocolate doughnuts and other treats, they called it a night. By that time, they had amassed several pounds of food they planned to use to make butternut squash soup. The beef broth would be taken to a pantry.

"One of the biggest paradoxes that comes along with Dumpster-diving," Miller said, "is that you feel so excited when you find so much stuff in the trash, but on the other hand you feel so sad, because you know you can’t use it all yourself and you know that you will not be able to take it all."