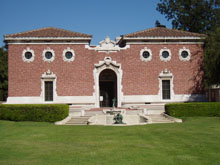 The William Andrews Clark Memorial Library, located off the UCLA campus in the historic West Adams area of Los Angeles, has reopened after two years of renovation. The library contains collections such as rare books and manuscripts, primarily in English literature and history, fine printing and Oscar Wilde’s works. Established in 1924 and gifted to the university in 1934, it’s the oldest building at UCLA.

Caltech professor Andrew P. Ingersoll was awarded the 2007 Gerard P. Kuiper Prize in astronomy at the annual Division for Planetary Sciences meeting in Florida. A professor of planetary science, Ingersoll has done research on the runaway greenhouse effect on Venus, liquid water on Mars, supersonic winds on Io and atmospheric dynamics of various planets.

The Gerard P. Kuiper Prize is given annually to scientists whose accomplishments have “most advanced our understanding of the planetary system.”

USC has started an institutional channel online on youtube.com/usc. The channel is part of an effort to expand technology-enhanced learning and distance learning.

The agreement with YouTube allows USC to maintain a central channel, with various sub-channels that will stem from other schools, such as the USC Gould School of Law. The new channels will allow for students to view any number of stories, serving as a way to connect with current students and faculty as well as with prospective students and their parents.

Saul Friedlander, a history professor at UCLA, will receive the 2007 Peace Prize of the German Book Trade, which is the Frankfurt Book Fair’s highest honor for his writings on the Nazi Holocaust.