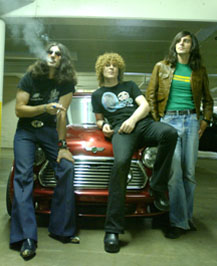 A glance at Mardo’s cover photo is the first clue that Robbie’s description could just as easily apply to Mardo’s music. The shot features Small sprawled on the hood of the car, wearing a Queen T-shirt and staring out from under a mop of Robert Plant curls. The Mardo brothers flank Small, with the shades-clad Aron lighting a smoke as Robbie lurks in leather and faded jeans. The message is clear, "We’re gonna start something!" Without a single note, the band has conveyed the cockiness that is at the very heart of rock ’n’ roll.

Mardo’s straight-ahead rock marinates in a big ’70s sauce, a mixture of arena pomp and nightclub swagger that borrows from the likes of Deep Purple or Golden Earring.

"Our parents had a huge record collection of all these timeless records," Robbie explains. "Lots of Beatles, lots of Kinks and Led Zeppelin."

Aron adds, "There was also a lot of Ry Cooder, Dave Brubeck, and a lot of everything. Our parents raised us with eclectic music, but as song guys. From Barry Manilow to the Rolling Stones, from Bob Dylan to the Police.

"Our parents always told us to be the very best you can be at every element, but it all has to come from the song," continues Aron. "You need to learn how to make a song appealing to where people whistling it down the street have the same impact as a full orchestra playing it. So we have always striven to be songwriters first and foremost. That’s the core element that makes the whole music world go round."

The brothers learned how to play by ear a little at a time with no formal training. With the exception of a sax solo by producer Les Pierce, Aron and Robbie play all the instruments on Mardo – Small having come aboard after the disc was completed. Besides his lead vocal chores, Aron plays bass and keyboards while Robbie doubles up with guitar and vocals.

Aron also provides artwork with a psychedelic bent for Mardo’s graphics, joking that "If you’re going to call your record Mardo, it better be all Mardo!"

Mardo has just completed a pre-release mini-tour of Southern California high schools where the music from their House of Restitution Records’ debut received a rabid welcome from students and faculty alike.

"We have a friend who works at Capitol Records who was very blown away that we were selected to be a part of this," Robbie says. "But we had the opportunity to make an impact dealing directly with our market. These kids buy 10 to 15 records a day and we sign a hundred autographs. We sell T-shirts and other merchandise, but another great part of it is that the teachers appreciate the way we handle ourselves."

While Mardo has just been released, the band has been in the studio cutting additional songs to use as B-sides for upcoming singles to be released on vinyl. The trio also plans to release some DVD treats for their fans before hitting the road for most of 2005. According to Aron, keeping the rock rolling is what Mardo lives for. "We enjoy working around the clock!"

For more information on Mardo and to purchase their self-titled debut album, visit www.mardomusic.com. Mardo will be playing for their CD release party on Feb. 7 at the Viper Room in Los Angeles.