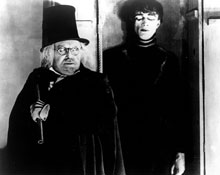 For the film buff who’s already spent one too many Halloweens watching a double bill of The Exorcist and The Texas Chainsaw Massacre, the Disney Hall will be showing the landmark silent film The Cabinet of Dr. Caligari with a live pipe organ accompaniment. Perhaps the most famous of all films to emerge from the German Expressionist movement of the post-World War I silent era, Caligari practically invented the horror film and would go on to shape the works of such filmmakers as Tim Burton, Terry Gilliam and David Lynch.

Staunch devotees of cinematic realism are urged to stay away. Expressionism is a stylized art form in which the external world is shaped by the distorted and horrific interior world of the film’s characters (who are often psychopaths).

There are no right angles in the world of Caligari. The buildings jut out at sharp and exaggerated angles, like some sort of gothic cartoon. The acting is also heavily representational.

However, if you as a viewer can approach the film not as you typically would a movie but watch it more as a painting come to life, melding with a performance art piece, it will be an entertaining and original way to spend Halloween night.

There is no better way to experience silent cinema than on the big screen with live musical accompaniment and an audience. The experience can sometimes approximate the feeling of time travel, as if you can feel yourself experiencing a Halloween night in 1920. Who knows, you may even find yourself getting lost in the twisted world of Dr. Caligari.