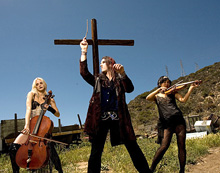 One thing you can’t say about Midnight Reign is that they’re a “typical band from L.A.” With numerous lineup changes, crazy biblical references that criticize established religion and their fusion of classical strings with heavy metal, it’s hard to say this is a “typical” band from anywhere.

Joseph Michael, Midnight Reign’s lead singer and circus leader, has brought his distinct vision to fruition with their debut album, Never Look Back. Its concept revolves around a musician experiencing a lucid dream while tripping on LSD.

In an attempt to commit suicide, he slits his wrists in a bathtub and lays back to slowly embrace death. The album takes a bizarre turn when the musician emerges from the bathtub and cannot determine if he’s still alive or dead.

Michael believes his songs will stand the test of time. “They’re melodic and well written,” he says. “Especially if you hate them, they will stick in your head.”

Midnight Reign’s current lineup is the most stable and satisfying to date for Michael. He plays every instrument on the album including violin, piano and guitar. His vision is presented live with Richie J. on drums, Mark Dayton on bass, Paul Sternquist on guitar, Starla Baker on cello and Alma Cielo on violin.

All of the band members manage to coexist despite their different backgrounds and religious views. Take for example Michael, a stern critic of established Catholicism and drummer Richie J., a devout Catholic. Despite their opposing views, both agree that the music brings them together.