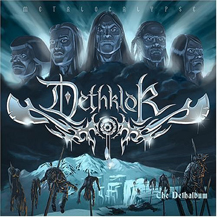 Hell, Dethalbum will sell so many copies that they’ll have to make up a new number just to describe it. How could the music possibly meet such high expectations?

Well, the band cleverly sidesteps that challenge with a compilation of songs only heard on their Adult Swim reality show, “Metalocalypse,” material from their 16 unreleased albums and re-recordings of their classics. Tunes like “Awaken,” “Fansong,” and “Thunderhorse” rock just as hard outside of the show. The best is a malevolently catchy new track, though, “Hatredcopter,” which features some inspired shredding from Skwisgaar Skwigelf.

Since this isn’t a proper full-length, the production and sequencing are less than perfect. However, Dethklok earn their beer money once more.

The Dethalbum is currently available.