The Merchant of Venice: Shakespeare Favorite Joseph Fiennes in Another Well-Crafted Role 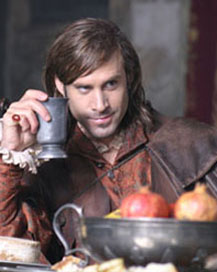 Despite being a trained and accomplished Shakespearian actor, Joseph Fiennes is largely known in the film world as the younger brother of Ralph Fiennes. While his older brother has shown versatility in such films as Schindler’s List and The English Patient, Joseph has been cast in historic period pieces which include Elizabeth, Shakespeare in Love and, most recently, The Merchant of Venice.

Although he has seemingly been typecast in Shakespearian fare, the younger Fiennes doesn’t mind. After spending a good deal of his youth studying the great playwright at such prestigious venues as the Young Vic Youth Theater and the Guildhall School of Music and Drama, he went on to perform a variety of other roles in London’s West End. Yet he returned, once again, to perform the bard’s work when he joined the legendary Royal Shakespeare Company.

Fiennes says that he feels a force is guiding him, making him like a puppet. "Where the Olympics are for the athlete, Shakespeare is for the actor. It’s physically, mentally and spiritually challenging and you don’t get that all of the time. I guess I go back to it because it feeds me."

Director Michael Radford (Il Postino) felt casting Fiennes in the role of Bassanio was self-evident, considering he has seen him play Shakespeare before at the National Theater in England. Radford feels that Fiennes is "awesomely good" and likes his Shakespearian technique, which leads Fiennes to constantly search for his character as well as his humble demeanor.

"He tends to over-complicate things a little to himself but that’s just his way," Radford says. "He’s such an equitable, sweet man. Not to have another huge ego on the set is great."

Al Pacino, another Shakespeare-trained actor, plays the part of Shylock in the film. Considered one of Shakespeare’s most tragic figures, Pacino takes on the role of the Jewish moneylender who discovers the price of vengeance.

Radford says that The Merchant of Venice would never have happened if Pacino hadn’t agreed to be in it. Fiennes says he could talk all day about having the chance to work with Pacino.

"I’d love to work with him again," Fiennes says. "He is great to act with and he provides interaction that you usually just find in theater."

Playing the part of Portia, newcomer Lynn Collins (50 First Dates) welcomed her fortune of receiving advice from the likes of Pacino, Jeremy Irons and Fiennes. With Fiennes playing Portia’s husband, Collins reveled in the rehearsal time with him, especially the intimate scenes.

"I had a major movie star crush on Joe," Collins says. "We kissed a lot in rehearsal as we were trying to figure out how intimate these people were."

With the world in turmoil today, Fiennes says that The Merchant of Venice can come across as a politically, globally and pertinent piece.

"We’re doing [this film] because it is about human conditions such as love, hate, redemption, mercy, forgiveness, fanaticism – everything that’s going on [and] are seeing a lot of today," Fiennes says.

Radford believes that all of the misunderstandings that happen between the story’s characters are a result of a general ignorance of other cultures, with The Merchant of Venice focused on the endless conflict between two particular cultures.

"It’s set in a context where Christians and Jews were at each other’s throats – where two cultures didn’t understand each other at all, [and] were completely ignorant of each other living together," says Radford, adding, "Pretty much like today."

Although he admits that not every Shakespeare role is thrown his way,

Fiennes is interested to see what roles will be offered to him in the future. He says that he would also show interest in a modern Shakespearian films, such as Baz Luhrmann’s Romeo + Juliet.

Fiennes concludes by saying that Shakespeare’s prominence will continue well into the future, no matter how the stories are manipulated. He will survive if you turn his work inside out, upside down, or just perform it in the traditional manner.

"[Shakespeare] wins through whatever you do with him, he is that strong," Fiennes says. "He survived 400 years – you can chuck anything at him and he will come through."

The Merchant of Venice opens in limited release Dec. 29.