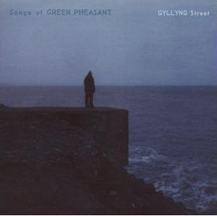 Pretty much everything about this release is unusual – the band name, the album title and the music itself. Songs of Green Pheasant is the brainchild of Duncan Sumpner, who has operated as a one-man band in the past. Here, however, Sumpner allows the trumpet, drums and bass to be played by guests on a smattering of Gyllyng Street’s seven songs, and Julie Cole adds vocals on one number, “Fires P.G.R.”

But one thing the listener will not be prone to do is pick these individuals out as everything fits together so nicely that it’s almost subliminal. Gyllyng Street begins with “Boats,” a tune that’s completely dialed-in to the highly suggestible moment of consciousness that comes right before or after sleep.

“Boats” dissolves with a flourish of frantically tweaked church bells but rather than be alarming, the peals open the door for the other “gentle” psychedelic effects sprinkled throughout – radar blip guitar, pixieland flute, a stray note on harmonica. Sumpner gets a bit “out there” with “A Sketch for Maenporth” but the track is an ambient masterpiece.