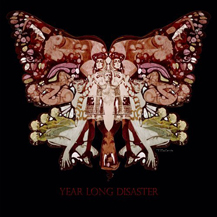 This new band comes with an interesting pedigree: drummer Brad Hargreaves is a veteran of Third Eye Blind, bassist Rich Mullins is from the hard rock instrumental band Karma to Burn and guitarist/singer Daniel Davies is the son of Dave Davies, guitarist for British Invasion hitmakers the Kinks.

But there are no similarities to the Kinks; instead Davies channels the blues-based rock sound that Led Zeppelin had such success with. Yes, it seems like everyone these days is getting compared to Zeppelin. YLD doesn’t rip off the band, and they owe as much to other veteran heavy groups like Foghat as they do to Zeppelin but one listen to songs like “Cold Killer,” and it’s clear that Davies has studied the vocal nuances of Robert Plant.

The band knows where that sound came from originally, too – “Leda Atomica” cooks to the classic John Lee Hooker boogie that inspired so many heavy rockers of the ’60s and ’70s. Don’t look for a hit single from these guys; this is album rock meant to be heard from beginning to end.