The Genius Club's Tim Chey: Outside the Courtroom, Behind the Camera 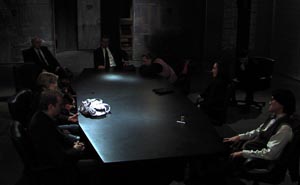 For writer and director Tim Chey, this was not the life he wanted to lead. After studying extensively and a two-year stint as a lawyer, Chey was dying to go back to what he truly loved: film.

If he were to have an effect on the world, he would do it outside of the courtroom and behind the camera.

Had he the power, he would “try to find a cure for cancer within the next two years,” a desire that stems from the fact that his cousin died of cancer. It seems a little out of reach, but Chey finds that he can at least affect the way people think through his films, hence the making of The Genius Club.

“Originally, I wanted to make a film about why we have no cure for cancer,” explains Chey. “But then I decided to broaden it to touch on the world’s problems. And then I thought I would add a twist by having these geniuses try to solve the problems in one night.”

It’s a little impossible, but that’s the point.

“The idea was just too irresistible,” says Chey.

In The Genius Club, a mad genius-turned-terrorist gathers a group of seven geniuses – a scientist, a seminary student, a pro baseball player, a casino owner, a professor, a painter and a pizza delivery guy – to attempt to solve the world’s problems in one night or else he’ll detonate a nuclear bomb in Washington, D.C.

Taken from their normal lives on Christmas Eve, the geniuses (each with an IQ over 200) are forced to tackle problems such as world hunger, war, cancer, terrorism, rush hour traffic, jerks and ultimately God and the meaning of life. Despite facing the daunting task of finding solutions to worldwide problems, the group brings up pertinent issues.

Still, even though he raises questions regarding funding for the Iraq war and corporate power, Chey makes it clear that “this is not a political film.” At the same time, this doesn’t mean that there isn’t a message to The Genius Club.

“The ultimate question is: Does God exist?” says Chey. “You can’t go through life without asking it at least once because if God exists, then that is the entire meaning since He is in control. Therefore, it’s a central question.”

Religion clearly plays a big part in Chey’s life and films. A former atheist, Chey was not exactly proud of how he used to be: “I was a despicable, money hungry, greedy miscreant … and it’s totally OK for you to be writing this down,” he jokes.

Receiving 6,000 applications from actors was no joke, though. People wanted to be a part of this project, and Chey was taken aback.

“I was stunned,” says Chey. “I’ve never seen so many actors apply for something at once.”

With the help of a carefully selected cast and Steve Arnold, art director for movies such as Spider-Man, Van Helsing and Forrest Gump, the film quickly became a reality and was wrapped up in only 18 days.

Chey started his career in entertainment with the film Fakin’ Da Funk, a comedy that became one of the highest-rated movies on USA Network at the time. Ten years later, the writer and director has delved into content that is both immediately relevant and personal. With a deft effectiveness, Chey wrote a large part of The Genius Clubin a month spent in Colombia, a feat that parallels the filming time.

And he isn’t done yet. With plans to film seven films in 22 countries over the next 10 years, something that Chey describes as “almost like a movie franchise,” he still has big plans and soaring ambitions.