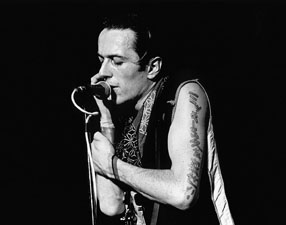 In life, there is no greater drug than Joe Strummer’s voice set against the backdrop of Mick Jones’ guitar playing.

Joe Strummer: The Future is Unwritten is a fiery documentary that gives music addicts exactly what they want: Joe, Joe and more Joe. Director Julien Temple seeks to (and succeeds at) demystifying the late Clash frontman by examining his existence outside of the popular band that made him a star.

Temple himself is no stranger to the world of the musical documentary. In 1979 and again in 2000, he helmed two respective projects on the Sex Pistols (The Great Rock ’n’ Roll Swindle and The Filth and the Fury).

As a matter of fact, his stellar career has boasted a wealth of work with musical greats. In 1980, Temple directed a series of popular music videos starring various top acts of the day like the Rolling Stones, David Bowie as well as the Kinks – one of his favorite bands.

“It’s very improvisational,” he says of his style.

He’s a director who has focused on the “art” of moviemaking. Much of that comes from the time and the place in which he earned his sea legs – London, during the 1970s. This is the violent and creative setting in which his first collaborations with the Clash began.

“I did film them back then in ’76-’77,” remembers Temple. “The black and white stuff in the film is some of the footage I filmed at the time. I had intended to make a film about them back then and did work quite intensely with them for three or four months.”

The result is some powerful onscreen moments that capture a side of the Clash that most followers – pre-MTV – have never seen before now. The opening sequence of The Future is Unwritten shows Strummer in a recording studio, belting out the song “White Riot.”

“The beginning of the film is actually the first time the Clash recorded anything,” says Temple.

For all the excitement surrounding a movie about Strummer, there has, however, been some backlash. Steve Jones, a radio personality in Los Angeles (and an original member of the Sex Pistols) argued that there was a bit too much in the way of celebrity cameos throughout the documentary.

Stars like John Cusack and Johnny Depp (in Captain Jack Sparrow regalia) lend their two cents about this Renaissance man while sitting around a campfire with other friends and fans. Many have questioned the presence of such stars in a movie about a guy who was basically embarrassed by his fame. Though Temple defends the presence of these people, he also agrees with the sentiment.

“I don’t like endless celebrity fests and endorsements,” proclaims the director. “You know, you’re a human being first. But I did use people who had taken something from Joe, so it wasn’t arbitrary.”

That’s part of the beauty of Joe Strummer’s legacy. He existed on so many different levels. Cusack, a lifelong fan of the Clash worked with his hero on the 1997 film Grosse Pointe Blank. Depp, who at one time pursued a musical career, was also a fan and shares the singer’s irreverent work ethic.

But for every big name in the film, there are the folks in the shadows – friends from Strummer’s days as an art student, as well as the women he loved along the way – that really lend a special note to the movie. They recount the crazy and fascinating stories that only a best friend would have.

Temple pairs this intimacy with animated footage from artwork that Strummer himself penned. He also cuts footage from such animated classics as George Orwell’s Animal Farm.

Though he admits that he never would have attempted this particular film about Strummer during the musician’s life, Temple can rest assured that he’s delivered a fitting tribute to an everyday man who became a rock ’n’ roll legend.