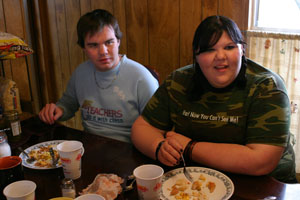 Growing up in the cesspool of depression that is small town living can be a hassle for anyone ... different. The stares. The nasty remarks. The giggles. The fear of never getting out into the real world.

All across America, there are unique young people deeply rooted in that existence. Standing out is especially daunting for the characters in Ash Christian’s new film, Fat Girls.

In this offbeat, yet touching comedy, Rodney (played by Christian) and his zaftig best gal pal, Sabrina (Ashley Fink) toil through those ever-languishing Southern doldrums. Their Texas town is chock-full of evangelical dogma and not exactly accepting of this gay boy and fat girl. Yet, like so many others before them, they manage to overcome those painful years, keeping a hopeful eye on the future.

Christian knows his characters quite well; as a kid growing up in Northeast Texas, this young writer/actor/director is no stranger to the feelings of longing that small town life produce.

“I thought of people in my real life and wrote it with their voices in mind,” he admits. While inspiration may have been at his backdoor, success is proving a pleasing vista before him. At age 19, Christian penned Fat Girls. At 20, he was in the process of shooting it. And by the age of 21, the film was having its debut at the Tribeca Film Festival.

“We sold the movie there, which was a huge deal just because it never really happens,” he says, laughing.

Other festivals like Outfest and Montreal have bestowed praise and accolades on the production, ranging from Best Feature awards to acting nods for its stars. Though praise from your peers is always flattering, Christian admits that he still has an interest in what his general audience might think.

“People have been loving it,” he says. “I look at stuff online, I read message boards, people talk to me and e-mail me; everyone’s been really positive!”

It’s no doubt that a lot of that goodwill stems from the fact that Fat Girls is a movie truly made within the spirit of independence.

“I didn’t go to film school,” confesses Christian. “I didn’t even go to college. I learned about filmmaking from making movies. I made a couple of shorts before Fat Girls, which played on the festival circuit, but I really learned how to make a movie by trial and error. Mainly error.”

Surely some friendly help during the laborious process of moviemaking came in the form of an unlikely pairing. While attending the Deep Ellum Film Festival for another project in which he appeared, Christian attended the screening for the critically heralded indie docu-drama Tarnation by director/editor Jonathan Caouette.

Christian walked away from the event deeply moved by the film and the story that it told. Upon meeting Caouette later that evening, the two struck up a fast kinship and agreed to work together on Fat Girls. As the character Mr. Cox, Cauoette provides the voice of inspiration and hope to the lead characters.

In addition to snagging one of independent filmmaking’s hottest new names, other phenomenal talents soon followed. Robin de Jesus (Camp) was a last minute substitution for an actor that backed out of the project last minute. Fink is probably best known for her guest star roles on the long-running NBC show “ER” as well as Gwen Stefani’s “Rich Girl” video. And Deborah Theaker (Waiting for Guffman) worked with Christian on a previous project.

For his upcoming comedy called Magnus!, Christian hopes to work with his favorites actresses Parker Posey (Broken English) and Catherine O’Hara (Best in Show), as well as actor Steve Buscemi (Interview). He also thinks Jennifer Coolidge (American Pie) is hilarious and would welcome the opportunity to direct her.

But mostly, he’s sitting back and enjoying the fun ride of a small town kid in the Big Apple. He’s been living in New York – a far cry from Paris, Texas – and promises that in the future, he’ll try to set one of his projects in the famed city.