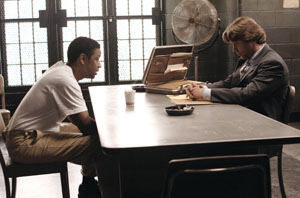 American Gangster is an epic mob opus with echoes of The Godfather, Scarface and “The Sopranos.”

Denzel Washington brings his signature intensity to Frank Lucas, the quiet driver to one of the inner city’s leading black crime bosses. When the boss suddenly dies, Lucas takes advantage of the ensuing power struggle and builds his own empire.

Through ingenuity and a strict business ethic he comes to rule the inner-city drug trade, flooding the streets with purer product at a better price. He becomes one of the most notorious (and wealthy) drug kingpins in the United States during the Vietnam War.

American Gangster is the classic story of contrasts: Lucas lives a high-class life by a strict code of honor and is quite respectable. This despite the fact that he’s responsible for the destruction of thousands of lives via the drugs he peddles.

His polar opposite, the yin to Lucas’ yang is Richie Roberts (Russell Crowe), a failure when it comes to his personal life, yet on the job, a man of high morals. As Roberts, Crowe delivers his most understated dramatic performance since The Insider. The destinies of these two men will become irrevocably intertwined as they approach a confrontation where only one of them will come out on top.

The movie is well acted; and the gritty look of the film is reminiscent of excellent cop movies of the 1970s. Also co-starring are rappers Common, T.I. and RZA of the Wu-Tang Clan. This film could be labeled The Godfather for the hip-hop generation.

In the end though, the story is a bit too long with too many extended periods in between the action.