Moped Army is Fueled with all the Might it can Muster 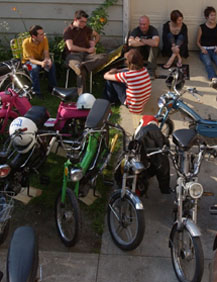 They travel in packs.

The sound of their engines arrives before they and their machines pull up to the curb.

Their motto: "Swarm and destroy."

And when they ride down a street, people turn and point. And smile.

They are the Moped Army.

Mopeds, those motorized vehicles that buzzed across America’s landscape in the 1970s, are back with a vengeance. Or for what passes as vengeance when you’re perched above a 2-horsepower engine that’ll get you zipping along at 25 or 30 miles per hour – 35 if you’re going downhill. They may not be taking over the streets yet. But give them time.

"They’re affordable, fun," said Curt Cameruci, a student at Columbia College Chicago and a moped devotee. "Once you ride one, it makes you feel like a kid."

Cameruci, 22, is a co-founder of Peddy Cash, the Chicago branch of the Moped Army, a loose confederation of 17 groups of moped enthusiasts with names like Hell’s Satans (Richmond, Va.), the Moped Militia (Chico, Calif.), One Screw Loose (Cumberland, Md.) and the Tom Cruisers (Tempe, Ariz.).

Cameruci is typical of this new wave of moped fans. They’re young, mostly students or recent college graduates, about two-thirds of them male. The Internet keeps them in close contact with each other. And they share interests – music, Pabst Blue Ribbons and mopeds. Mostly mopeds.

It all comes together once or twice a month when members from various branches hit the road to meet up with other branches. Which explains why some two dozen mopeds were crammed into Cameruci’s small backyard one recent weekend.

Peddy Cash is a relatively new addition to the Army. It started a year ago with Cameruci and then-roommate Patrick Turner, who grew up together in Kalamazoo, the epicenter of the moped world.

"It was a joke at first," said Turner, 23, also a Columbia student. "I had a scooter and bought a moped. We joked around – ‘we’ll start a Chicago branch of the Army.’ Probably after a few beers."

"We started driving them around, and all our friends were really interested," Cameruci said. "They got hooked on it. And it started growing from there."

A year ago they had four members; they recently added their 18th.

For those who haven’t run into the Army yet, mopeds are small, easily maneuverable vehicles that you can pedal or run via a small engine. They’re designed to carry one person, though some models can be customized to carry a passenger. And riders generally follow rules of bicycling – you can ride in bike lanes and use bike racks, for example.

Moped Army members are big on 1970s-era mopeds – Puchs, Motobecanes, Garellis and the like. You can find them on eBay or through classified ads for a few hundred dollars. You can sometimes get one for less than $100, though it’s going to need work. Fortunately, they’re simple machines – "such severe basics," is how Turner puts it – and anyone can learn necessary maintenance.

"And once you fix one, it gets easier," he said. "It took us two months to get the first one Curt got running. Now we’ll get some random one that hasn’t run for a couple of years and we’ll get it going in a half-hour."

Another attraction is the cost to run them. They get 100 miles a gallon, sometimes more.

"It’s getting away from the Vespa – new/old, you know?" said Jamie Berg, 25, who hangs out with the Peddy Cash kids.

Nodding toward the bikes that were being wedged into Cameruci’s yard, Berg said, "These are all truly vintage. These are all probably 30 years old."

For the BlingBBQ, most Moped Army members had come to Chicago by van or truck, although in April the kids from Indiana rode up, all seven butt-challenging hours, to hook up with their Chicago brethren. A small price to pay for the fun of these weekend gatherings.

Among topics of conversation at the BlingBBQ was a rehashing of the Decepticons’ 10th Moped Army BBQ that was held in June.

"Our ride had about 60 people – people from Maine, North Dakota," said Beth Percha, 19, a student at Western Michigan University and one of the Decepticons. "That’s the best part. The bigger the group, the more pumped up you get."

From all accounts it was a successful ride, beyond the numbers.

"We didn’t have any breakdowns," she said. "We just had (parts) fall off. Like, ‘Hey, you lost your muffler.’ And we’d put it back on and ride."

Kalamazoo was the birthplace of the Moped Army about seven years ago, when Simon King, Dan Kastner and Brennan San got together. San had a moped, then King and Kaster each got one.

"Almost instantly we said, ‘We should have a moped gang,’" said King, 25, who along with Kastner came in for the BlingBBQ.

Things snowballed. Friends tried the mopeds. They were won over.

"I’m really not that surprised that people are excited about them, because it’s infectious," said King, a Web designer. "It’s hard not to want one once you’ve ridden one. But it was never envisioned as this thing with multiple branches all over the United States. That’s been the surprise."

A Web site (www.mopedarmy.com) has done a lot to mobilize the Army, giving members a forum where they can compare notes on bikes and, maybe more important, get revved up about the moped lifestyle.

"Since we’ve been a branch for less than a year, we’re just starting to become friends with the other kids," Cameruci said. "But they’re very accepting. Very cool people."

"We all have the same interests," said Berg, who hails from Elkhart and whose boyfriend, C.J. Biek, is in Motion Left and runs a moped shop with his brother Devin. "Within each group people are closer, of course, because they hang out more. … [But] the camaraderie is definitely a glue.

"You’re just able to come out and enjoy people, enjoy the bikes. Talk to people about bikes."

"We see the moped as more than a means of travel and truly believe in the lifestyle that accompanies riding one.

It’s all about the moped’s aesthetic, its marginalized status in our society, the friendly traveling, easy stop communication and our ability to enjoy the trip as well as the destination."