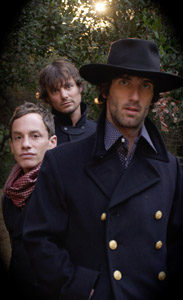 Losing a band member sometimes leads to disaster and sometimes leads to redefinition. In the case of Portland, Ore. band Stars of Track and Field, losing their bass player a few years back inspired a regeneration of their musical project. Instead of searching tirelessly for a new bassist, the band transformed itself from a traditional indie rock quartet into a synergistic trio and ventured into digital territory to supplant its analog deficiency.

This shift into digital soundscapes was not confined solely to electronic bass lines. The band – Kevin Calaba (vocals, guitar, keyboard), Jason Bell (guitar, vocals) and Daniel Orvik (drums, programming) – found that the idea of exploring other synthesized alternatives was a natural progression.

“At first it was very experimental,” explains Bell. “But once we started doing the bassline ourselves it became pretty apparent that with the same equipment we could start doing drum machines, too.”

The end result is a compelling fusion of organic rock and electronic pop that makes overt reference to musical contemporaries the Postal Service and French electronic band Air. The band spans so many different genres that it’s sometimes difficult to pin it to a specific heading.

“There are all these categories and sub-categories: indie pop, alternative, rock, digital. It’s really tough, but the best one I’ve heard so far is digi pop.”

Fueled by this initial success, Stars of Track and Field launched into a more ambitious project, the recording of their debut album, Centuries Before Love and War, which found them exploring heavier thematic material and expanding their digital horizons even further. Initially signed by a small L. A. indie label, Sidecho, their record and contract was eventually purchased by Wind-up.

The album, which the band defines as a concept piece centered around the ideas of love, war and time, offers an array of Britpop infused tracks replete with chiming choruses and glittering eclecticism. At their best, Stars of Track and Field hit fragile sweet spots by merging their cutting edge digital exploits with restrained yet percolating guitar arpeggios. At their worst, the band sinks into inarticulate, chirpy pop clichés that blur seamlessly and forgetfully into one another.

“The worst is when someone gets preachy in getting their message across,” says Bell. “It’s sometimes difficult to present your themes in an insightful way without being heavy handed. We tried really hard not to be bossy by showing how this conflict [the war] has affected people emotionally.”

If the anti-war movement had a musical texture and a palette, it would not be Centuries Before Love and War, which for all its sonic interplay and musical niceties, caters more to an indistinct celebration of love than it does depict the harsh emotional realities spurred by a pointless war. To be fair, the album was never meant as a soapbox sort of protest record, but even as an exploration of the emotional repercussions of conflict, the album feels too bland and vacant for that sort of ambitious project.

Nonetheless, with the album complete and their label in place, the future looks bright for Stars of Track and Field. Having just finished touring with Jeremy Enigk (Sunny Day Real Estate) in August, the band just kicked off a U.S. tour with the Twilight Singers.

“I think what we’ve done at this stage is great because we’re all so young,” Bell admits. “But by no means do I think we’ve hit our peak. By touring and hearing what other bands are doing, we give ourselves an even better chance to grow as a group.”

Centuries Before Love and War is currently available. The band will perform Nov. 6 at the Roxy in West Hollywood. For more information, visit www.starsoftrackandfield.com.