The Evolution of Facebook: Not just for college kids anymore. 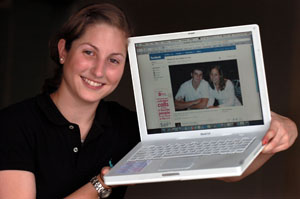 Facebook ages a person or dates them, at least.

After all, there was a day when Facebook was open only to people with a .edu e-mail address, when thousands of high school seniors gathered expectantly in front of their computer stations, waiting for that coming-of-age moment when they could sign on and friend everybody in existence.

Those were the days that people still looked at you funny if you used the word “friend” as a verb.

Since then, Facebook has become a bit more sophisticated, and lost some of its rosy-cheeked glow that so captured us in its nascent stages. Then, poke wars reigned supreme, and quality groups like “I go out of my way to step on crunchy looking leaves” were formed.

Now it’s all about what groups you join, how recently you’ve updated your status and which of the hundreds of applications you’ve signed up for. As with all things, along with some of the new bells and whistles of this ever-growing community come dangers that didn’t exist in the beginning.

The evolution of Facebook from its enclosed, communal stance to its current sprawling form was almost inevitable. When it had limited itself to “college-only,” the denizens protested the exclusion of their friends from two-year schools Facebook hadn’t yet included. Then came the addition of high school students, to which many college-age users bristled as they saw people come on board who hadn’t done their time.

But the real insult came when Facebook opened up completely.

That created a danger zone. Nobody will soon forget the case of Stacy Snyder, the teacher-in-training that lost her degree when her school found photos of her on MySpace, taken while drunk at a party. It was made clear that your space for expression was under careful scrutiny, by your teachers, possible future employers, and worst – your parents.

“I didn’t mind it when they included high schoolers,” says Rebekah Sick, a junior at USC. “They were a year behind me, and usually people I got along with in high school. When everyone joins, it’s like MySpacing it.”

The opening of Facebook created a sense that it was devolving into a MySpace-esque environment, which some consider trashier because of its customization and wider appeal.

The News Feed actually caused quite a commotion. Suddenly, you knew more about that person you had friended, just to be polite than you ever wanted to.

It was also a lot easier to keep up with people you actually liked when their doings were posted for all to see.

And thusly we entered into the era of “Facebook stalking.”

Creepy as it may sound, Facebook stalking is really nothing more than a competitive sport to keep up to date on as many friends as you can. In this way, you know who’s dating whom, who’s up to what and how long they’ve been up to it, all without the hassle of an old-fashioned conversation.

“One thing it really did was make things ‘Facebook official,’” Sick says. “Instead of going and talking to people on the phone, people just wait to see it come out on Facebook.”

Since its creation, Facebook has become more than just a way to keep up with your friends, however. It now acts as a marketplace, a public opinion poll, even a political canvassing arena. It’s “hip” for politicians to have Facebook groups and profile pages to prove, if nothing else, that they know where all of the 18-24 voters are hiding.

Could Facebook prove a way to get young people out of their chat sessions and into polling booths? Will the new applications, from Harry Potter Spells to Happy Hour, be more than another series of irritating solicitations?

Only time will tell, but if there’s a will, there’s probably a Facebook group about it.