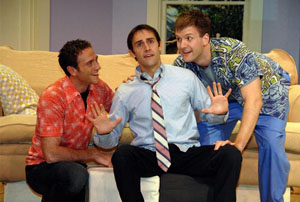 Tom Kerwood (Brian Stanton) must curtail the crazed shenanigans of his brothers, Dick (Nicholas Levene) and Harry (Jaime Tintor), before his wife, Linda, the police and Mrs. Potter, the woman from the adoption agency uncover their inane plans in Ray and Michael Cooney’s play, “Tom, Dick and Harry.”

Linda (Christy Hall) is oblivious to the intricate plots swirling around her. Her motive is pure; she just wants to impress Mrs. Potter (Kerry Michaels).

The door-slamming farce moves at a ludicrous pace. The brothers must hide a dead body, contraband cigarettes and alcohol and two living Kosovo fugitives.

There is a precise mathematical formula to keeping the hero up to his elbows in secrets and lies. “Tom, Dick and Harry” has all the components of a good farce, but it panders to the lowest common denominator, replete with lowbrow humor and groan-inducing puns. The Cooneys, a father and son team, have nailed the precise formula, but it’s a sickeningly sweet sitcom with a predictable happy ending. The most redeeming element of the play is its performers.

Stanton channels Cary Grant in Arsenic and Old Lace, running about like a lunatic, lying through his perfect smile. He has impeccable timing, watching him dig deeper into a miasma of lies is fascinating and funny. He nails the harried married Tom with ease.

Levene is charismatic and talented. He manages to charm the audience even when spouting off hackneyed dialogue.

The play may be worth checking out for its three leading actors. They are not just any Tom, Dick or Harry.