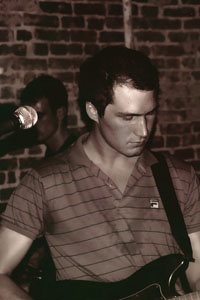 When prompted, it should seem unlikely that Matt Lamkin and Matty McLoughlin would suggest dream tour pairings completely outside of the genre to which they belong, to which their audience insists they belong. But the respective frontman and guitarist of the Muslims, a young quartet out of San Diego, aren’t eager to discuss genre at length, and don’t care to be pigeonholed by the longtime mark of lazy music criticism.

Most available press on this band contains the name Velvet Underground, whether it be the critic’s own distinction or a disagreement with that of another. With only a demo behind them and an album in the making, the Muslims are already oft lumped into a category more specific than the basic “rock ’n’ roll” label they’d be content to own.

But they shrug off labels with a certain coolness, noting that the clichéd method of their hometown is to take on a style that breathes nostalgia and refuses to stray from a premeditated decade – Lamkin in particular acknowledges the gimmickry they agreed to avoid from the start, careful not to claim a title like “retro” or “surf rock” for fear that there would be no room for experimentation.

“We didn’t want to be pigeonholed into some decade, where people would be uncomfortable if we wrote a dance song when we were supposed to sound like the 1960s.” Instead, Lamkin says, he’d relish the freedom to experiment with samples or drum machines, a tentative plan for the near future.

On the whole, he says, “I like seeing someone have the courage to be themselves in front of people. There’s more depth to someone’s personality than when you get some little one-liner or gimmick.”

This said, of course, the day after an accidental headlining set at downtown venue the Smell, where earlier sets saw canned pineapple passed around by cardigan-coated arms, and 20 minutes’ worth of surf rock fit for the eeriest of nights at Disneyland’s Space Mountain. This afternoon, though, they’re tired, and McLoughlin’s feeling bad about his unbrushed teeth.

He and Lamkin have slept over at a friend’s house while band mates Gabe Cross and Richie Lauridsen have returned to San Diego. McLoughlin and Lamkin are wearing the clothes they performed in the night before, and despite circumstances are warm and well mannered.

On first impression, McLoughlin is the epitome of Southern California appeal with a cheerful anything-goes demeanor and wide smile, while Lamkin is his perfect complement, seemingly introverted with carefully thought-out, well-articulated ideas and a smile that comes with reservation.

The two have served as the core of the Muslims since the band’s inception, this likely due to the fact that the bass and drums have been played by a small but rotating cast over the last year. However, both note that Cross and Lauridsen are solid additions to the band, hoping that both remain as they relocate one-by-one to Los Angeles, where the group has seen more welcoming audiences than in San Diego.

McLoughlin in particular notes that the San Diego scene is in fact that, a scene, where audiences are comprised of people looking to pay for a social circle or review opportunity, rather than enjoying the music itself.

“Old blogger guys with their arms crossed, people who pay five dollars just to be there – I never understood the point of paying money to go act like a crabapple.”

Another motivating factor for the transition north might be those “rich white friends” who feel “entitled” back in San Diego, mentioned in the song “Right and Wrong.” This is a band willing to question what doesn’t seem right or clear, and they’re refreshingly comfortable people who act without the least bit of irony.

On this subject, they also mention that they were musically influenced a bit by Nirvana, adding the dry reminder that it’s “supposedly not cool to like Nirvana right now.” Cool or not, they’ve thus far tucked a bit of grunge into songs like “Call it a Day,” where the carefully lazy dissonance of Nirvana creeps into their typically cool and collected rock ’n’ roll.

And what should happen if that cool rock ’n’ roll catches on after the upcoming tours and album release they’ve got planned? They shouldn’t get ahead of themselves, reminds McLoughlin – they’re called the Muslims.